Families of detained students of Cairo's Al-Azhar University have complained of assaults on their daughters by criminal inmates under the eyes of prison guards. 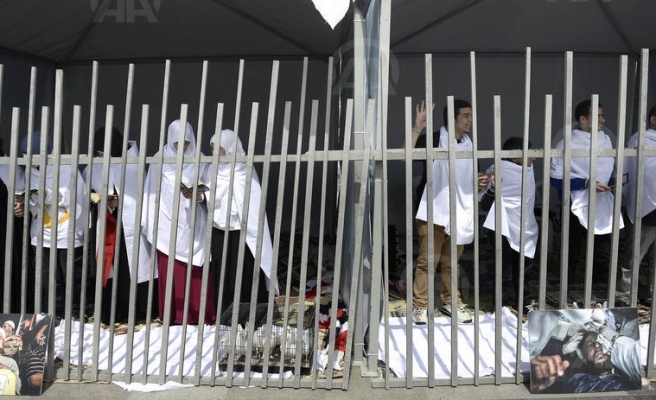 A local rights organization called on Thursday for an investigation into reports of verbal and physical assaults on detained female student supporters of ousted president Mohamed Morsi.

"Assaults on detained female students by female criminal inmates in presence of security personnel in the [northern] Qanater prison go against honor and chivalry and violate international human rights doctrines," the Egyptian Observatory for Rights and Freedoms (EORF) said in a statement.

Families of detained students of Cairo's Al-Azhar University have complained of assaults on their daughters by criminal inmates under the eyes of prison guards.

"Assaults on Qanater prison detainees by criminal inmates have been increasing, amid unjustified silence from security guards," the EORF said.

The NGO went on to call for the release of all "political detainees, especially women and children."

A student group opposed to the military-backed government said earlier in June that least 1812 university students have been arrested since Morsi's ouster last July, including 33 female students, amid an ongoing crackdown on his supporters.

Lawyer Ahmed Nasr said his detained sister Asmaa and her detained colleagues have been "brutally beaten" by female criminal inmates in the Qanater prison.

"They were beaten for refusing an insult by one of the criminal inmates," Nasr said.

Asmaa Abdel-Fatah also cited a similar attack on her sister Aisha in the Qanater prison.

"Criminal inmates insulted Aisha and 15 of her colleagues and when they protested the insult they were beaten and taken to another prison as punishment," Abdel-Fatah told Anadolu Agency.

The pro-Morsi Women Against the Coup group accused prison authorities of ordering criminal inmates to attack the detained students.

"The Qanater prison warden is responsible for inciting criminal inmates to attack the detained girls," the group said in a statement on Thursday.

Egypt's Interior Ministry routinely denies reports of human rights violations inside prisons and asserts that all those who have been detained are held for criminal, not political, reasons.

Since the beginning of the academic year last September, many Egyptian universities have seen almost daily protests by pro-Morsi students, staged to denounce last summer's ouster of the democratically elected president.