The clash ends months of relative calm in the volatile border zone since U.N.-backed Congolese troops last year defeated the latest in a series of uprisings in eastern Congo 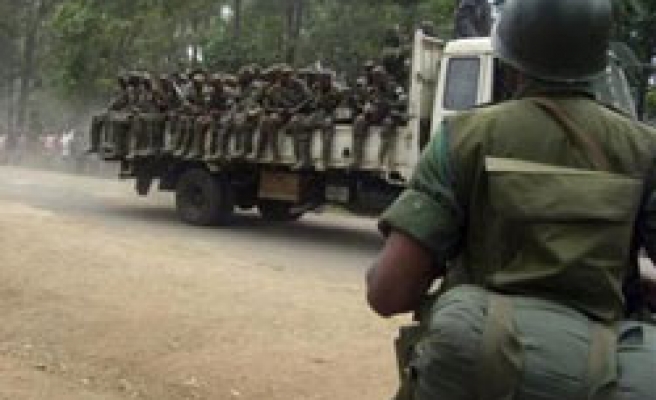 Democratic Republic of Congo and Rwanda accused each other's armies of mounting cross-border raids that led to a rare exchange of heavy weapons fire between the two nations on Wednesday.

Congo accused Rwandan forces of sparking the incident in North Kivu province by seizing and later killing a Congolese soldier. Rwanda said that its army killed five Congolese troops after they crossed the border and attacked Rwandan units.

The clash ends months of relative calm in the volatile border zone since U.N.-backed Congolese troops last year defeated the latest in a series of uprisings in eastern Congo, which is rich in minerals but has been plagued by years of war.

"Elements from the Rwandan army crossed the border not far from Kibumba around 3:30 a.m. and took a Congolese corporal, which provoked a reaction from our soldiers there who opened fire," Congolese government spokesman Lambert Mende said.

Mende later told Reuters the soldier had then been killed.

"He emerged from where he was being guarded at the border and, in the plain sight of his (Congolese army) colleagues, was shot down by the Rwandan troops. He was executed," he said.

The Rwandan government rejected the accusation, saying its forces had killed five Congolese soldiers after a group of them crossed the border into their country and opened fire.

"These actions by the (Congo) are jeopardising the region's extensive efforts to ensure peace, stability and development for all our citizens," said Louise Mushikiwabo, Rwanda's Foreign Affairs Minister and government spokesperson.

A Reuters reporter said that several Rwandan army helicopters were circling above the Kigali airport on Wednesday, although it was not clear if they were linked to the operation.

A Reuters reporter near the fighting north of Goma, the capital of North Kivu, said Congolese forces had deployed tanks to the area but clashes had eased by late afternoon.

Rwanda denies the charges and has accused Congo of harbouring elements of the militant Hutu militia that took part in the 1994 genocide, killing at least 800,000 Tutsis and moderate Hutus.

In a boost to efforts to ease the conflict between the two nations, dozens of members of the Rwandan Hutu FDLR rebel group laid down their weapons in recent weeks.

However, the FDLR are just one of a number of rebel forces still operating in eastern Congo and the conflict in the zone is fuelled by a mix of ethnic tensions, competition over mineral interests and local politics.

North Kivu Governor Julien Paluku said Congo would defend its territory but was not looking to intensify the conflict.

"Naturally we have responded but we don't want it to escalate into a conflict between the two countries," he added.