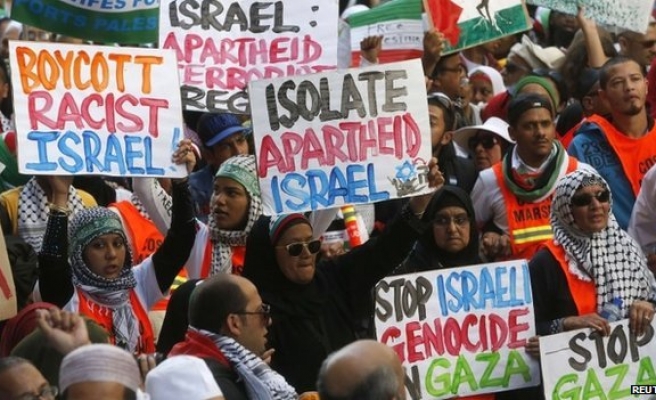 South African activists on Saturday stormed a store of retail giant Woolworths at Maponya Mall in Soweto, an urban area of the city of Johannesburg, over alleged trade ties between the store and Israel.

The busy store had to temporarily close down because of the protest.

"Free Palestine, boycott Woolworths," the activists – dressed in overalls and T-shirts – chanted and danced inside the store to the surprise of many of its clients.

Policemen were immediately called in and the protestors were led out, but they continued protesting around the mall where they were joined by several other sympathizers.

The activists who participated in the protest came from a number of civil society organizations, including the National Coalition 4 Palestine, the Congress of South African Trade Unions and the international campaign group, Boycott Divestment and Sanctions.

After they were led out of the store, the activists danced inside the mall, entertaining shoppers and also sending their message to hundreds of people who flocked to the popular mall, which is located about 10 miles south of Johannesburg.

The activists said Woolworths should take Israeli products off its shelves and respect the international boycott on Israel.

They also distributed boycott pamphlets to shoppers inside the Woolworths store and outside the mall.

"We want them to stop their trade ties with Israel," one activist, who identified herself as Mpho, told AA outside the store.

Woolworths has reportedly refused to make available the list of Israeli suppliers that it sources its products from, according to Desai.

"Sadly, Woolworths has also refused to meet with BDS South Africa and the organizers of the Boycott Woolworths campaign," he said, adding that sources at the retail giant had indicated that the company was feeling the impact of the campaign both at the public relations and financial levels.

AA could not immediately obtain comments from the administration of Woolworths.

Late last month, South African activists held a National Day of Action against Woolworths throughout the country with student activists in Johannesburg singing to the tune of Trey Songz "Oh Nana" which they adapted to read as follows:

“Oh nana, look what Woolies started. Oh nana, why you gotta be so brutal. Oh nana, I aint gonna spend this cash. Oh nana, if you keep stocking from Israel.”

A large number of South Africans are known to sympathize with the struggle of the Palestinian people under Israel's occupation of their country.