A large number of activities are lined up for the national event, which aims to bring back to public memory a world-revered icon 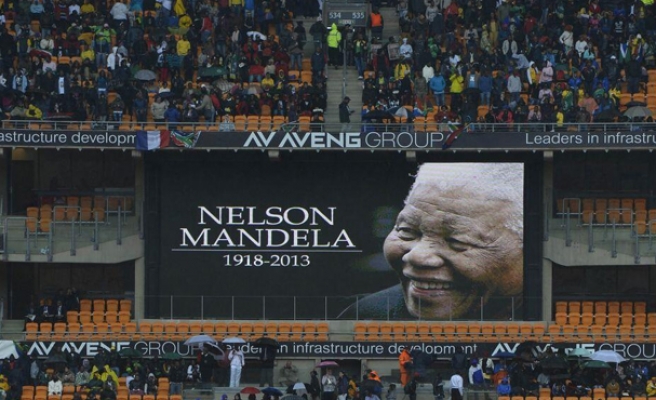 South Africa marked the first anniversary of former President Nelson Mandela's death on Friday with tributes to his struggle against white-minority rule and sober reflections on the country's failure to capitalise on the freedom he fought for.

Veterans of the anti-apartheid struggle lay wreaths at the foot of a towering statue of Mandela in Pretoria, where crowds earlier sang "Nkosi Sikelel' iAfrika" (God Bless Africa), the evocative national anthem adopted after apartheid ended in 1994.

Across the country, crowds gathered to ring bells, sound sirens and blare vuvuzelas for 3 minutes and 7 seconds, before observing 3 minutes of silence, in a 6 minute and 7 second tribute to reflect Mandela's 67 years in public service.

But it was also a time to reflect on the disappointing pace of change since 1994 and vent frustration at President Jacob Zuma and his ruling African National Congress (ANC) party.

"This moment should call upon us to pause and to reflect on the life of South Africa's greatest son," said Acting President Cyril Ramaphosa, standing in for Zuma who is visiting China.

Ephraim Mabena, 55, a veteran of the anti-apartheid armed unit Mandela helped found, called him an inspiration and a legend, adding: "The sad part is that he is no longer with us."

Twenty years after he swept the ANC to power, pledging to ensure universal access to quality education, jobs and houses, very little of the optimism that engulfed the country remains.

"Mandela was in a different struggle. The current leaders are in their own self-serving struggle," said student Paballo Nalane, 23, in a crowd at Nelson Mandela Square in Johannesburg.

A quarter of the working population - and 60 percent of the youth - is without a job. Society remains starkly unequal, fuelling crime and social unrest, and confidence in Zuma's leadership is at an all-time low.

"The eulogies will reveal that subliminally there is a continuing search for another Mandela," the Business Day newspaper wrote in an editorial.

Some found their own ways to remember Mandela, from celebrity cricket matches to art exhibitions. Tattoo parlours say they have seen an uptick in business from clients wanting Mandela's image permanently inked on their skin.

Mandela, who died on December 5 of last year, is venerated by South Africans as the father of their nation.

He spent 27 years in jail for taking up arms against South Africa's apartheid regime.

Mandela was released in 1990 to become South Africa's first post-apartheid president in 1994. He spent five years in office.

"It's still too early to live with the reality that Madiba [Mandela] is gone," Mandela's widow, Graca Machel, said last month at the launched of the Nelson Mandela Remembrance Walk in commemoration of the late anti-apartheid icon and former president.

Machel told guests at the launch in November that her heart grew heavier as it approached December – the month in which her late husband died.