He said that the struggles and resilience of the Palestinian people were a source of strength to the South African people during their struggle against the apartheid. 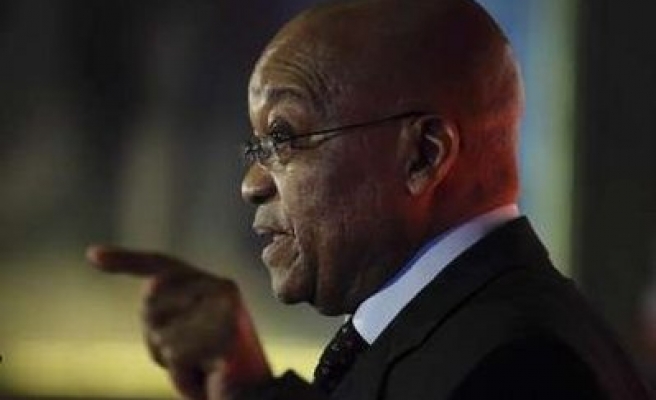 South Africa's President Jacob Zuma said Wednesday that South Africans did not forget Palestine since their gained their freedom in 1994.

"It is for this reason that our President Nelson Mandela declared that 'our freedom is incomplete without the freedom of the Palestinians'," Zuma said at a state luncheon held in honor of Palestinian Authority President Mahmoud Abbas , who is on a state visit to South Africa.

Zuma said that in keeping with the undertaking made by the late Mandela, South Africa will never rest until Palestinians achieve full statehood.

"We will be with you every step of the way no matter what it takes. You have outlined the type of support you expect from us and we will honor our promise to you," he said.

He said that the struggles and resilience of the Palestinian people were a source of strength to the South African people during their struggle against the apartheid.

"When the Apartheid regime invaded neighboring states and committed acts of wanton killing and destruction, we drew strength from the heroic manner in which Palestinians stood up to the Zionist invasion of Beirut in 1982," he said.

"We knew that just as Palestinians were not destroyed by the Israeli might, we too could withstand the might of the Apartheid army."

The South African leader further acknowledged that this year was a difficult one for the Palestinians.

"We are gathered here today after a devastating 50-day war by the Israeli forces against the people of Palestine. This is a war that left more than two thousand Palestinians dead, and in some instances, whole families were wiped out," he said.

Israel launched a deadly military offensive on the Gaza Strip in July and August with the stated aim of halting rocket fire from the Palestinian territory.

At least 2,160 Palestinians were killed – mostly civilians – and nearly 11,000 others injured in the onslaught, which came to a halt under an Egyptian-brokered cease-fire on August 26.

President Zuma said that when the Israeli war escalated; he appointed two special envoys to the Palestinian-Israeli conflict and peace process to convey South Africa's concern over the escalating violence.

"Mr. President, the struggle for full Palestinian statehood remains foremost in our minds," he told Abbas.

He said that South Africa stands firmly with the international community in demanding a two-state solution where Palestine and Israel will co-exist peacefully, side by side.

"We are confident that the people of Palestine will prevail and that the dream of our inspirational hero, President Arafat of a free and independent Palestine, will become a reality," Zuma said.

The two leaders earlier signed three agreements, including one for the establishment of a joint cooperation commission.

The second agreement was a memorandum of understanding for political consultations, which will see the two governments hold regular meetings to exchange their views on issues of common concern.

The two leaders also inked a cooperation agreement for higher education and training.

"We have agreed that the two ministers of international relations and cooperation and foreign affairs will convene an inaugural meeting of the joint commission in 2015," Zuma said.

The Palestinian leader is scheduled to receive South Africa's prestigious Order of the Companions of O.R. Tambo, symbolizing the unbreakable bond of friendship between the two countries.

The Order of the Companions of O. R. Tambo is a South African honor granted by South Africa's president to foreign nationals who have promoted South African interests and aspirations through their solidarity and support.