Parliamentary proceedings have been disrupted several times since the assembly's first session in June. 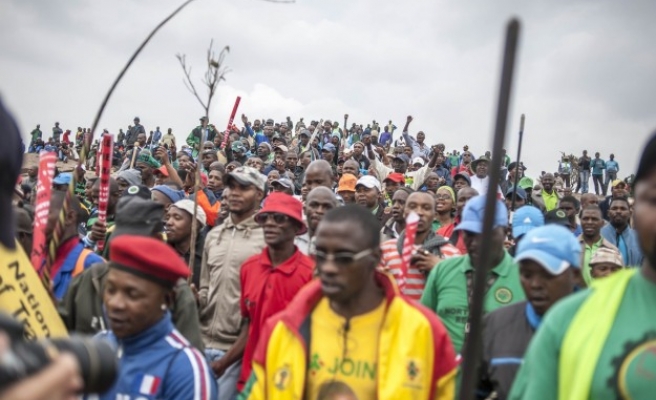 Many South Africans have expressed concern that their National Assembly (parliament) is becoming "unruly," with certain lawmakers accused of breaking the rules and the parliament speaker accused of favoring the ruling party.

"We voted for members of parliament to represent us in a respectful manner, but what we are seeing is very surprising," Mahmoud Muhidin, a resident of Johannesburg, told The Anadolu Agency.

Earlier this month, police were called into the assembly after an opposition lawmaker called President Jacob Zuma a "thief." He had been protesting a parliamentary decision to clear the president of any blame for spending some 246 million rand worth of public funds to renovate his country estate.

Parliamentary proceedings have been disrupted several times since the assembly's first session in June.

In August, MPs from the opposition Economic Freedom Fighters party interrupted Zuma when he was addressing parliament, accusing the president of using public funds to upgrade his personal residence.

Economic Freedom Fighters lawmakers, who often wear red overalls to show solidarity with workers, had heckled Zuma, demanding that he "pay back the money."

"Parliament Speaker Baleka Mbete was in no position to control what was happening in the house," he said.

Duvenhage asserted that the ruling African National Congress, which holds 249 of the assembly's 400 seats, was misusing its majority to shield the president.

"The expenditure incurred by the state [for the renovations]… was unconscionable, excessive and caused a misappropriation of public funds," Madonsela declared in a damning, 400-page report.

The upgrade of Zuma's rural home was supposed to have cost the state some $2.5 million. But with lavish upgrades – including a swimming pool, cattle kraal and visitor's center – total costs skyrocketed to $23 million.

Zuma has denied any involvement in the procurement and construction phases of the renovation and has adamantly refused to pay back the money.

In a recent statement, Zuma's African National Congress said South Africans had "watched with shock and horror as the National Assembly degenerated into a chaotic circus due to the unruly conduct of members."

The party expressed worry about the long-term implications of parliament losing its integrity and the respect it currently enjoys by society.

The opposition, however, quickly fired back.

"It is a misreading of these events to describe parliament as an institution in deep and fundamental crisis," Helen Zille, leader of the Democratic Alliance, the country's main opposition party, said.

She insisted that her party's job over the next five years would be to prevent the African National Congress from turning its internal problems into a crisis for South Africa's democracy.

Many analysts believe South Africa's current parliament is drawing increasing attention due to the performance of the opposition.

He noted that opposition lawmakers felt that Parliament Speaker Mbete was biased towards the ruling party.

"They accuse her of favoring the African National Congress, yet she is supposed to be neutral," Kotze said.

Political analyst Mzoxolo Mpolase, for his part, believes it is healthy for democracy to have a rigorous opposition.

He insisted, however, that lawmakers adhere to parliamentary bylaws.

Deputy President Cyril Ramaphosa recently met with the leaders of all parties represented in the assembly to discuss recent events.

Agreeing that the current situation was untenable, parties represented at the meeting agreed to work on restoring parliament's dignity, integrity and popular standing.

Assembly leaders also agreed to work together to ensure that parliamentary rules and procedures were applied without fear, favor or prejudice.