"Our presence here as the ANC is to assure the people of Palestine that no matter how long it takes for them to attain freedom, we will stand with them," senior ANC member. 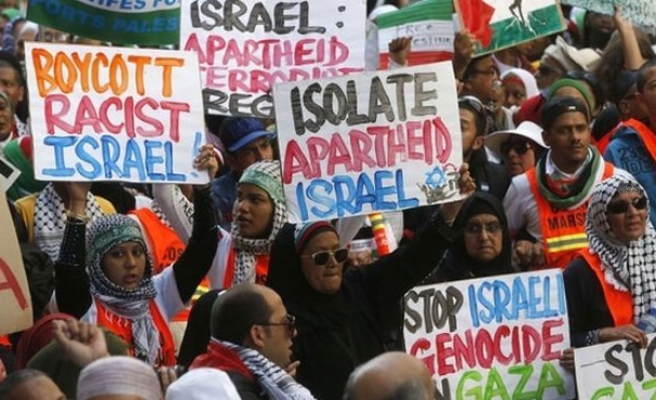 South Africa's ruling African National congress (ANC) said Friday it would continue to support the Palestinian struggle for liberation from Israeli occupation – no matter how long it takes.

"Our presence here as the ANC is to assure the people of Palestine that no matter how long it takes for them to attain freedom, we will stand with them," senior ANC member and Home Affairs Minister Malusi Gigaba said Friday while welcoming veteran Palestinian activist Leila Khaled at O.R. Tambo International Airport.

He said the ANC hoped for a lasting solution to the Israel-Palestine conflict, "[but] we stand with Palestine as the oppressed and seek justice for them as we [black South Africans] got it," the minister said at a press briefing held at the airport.

Gigaba further said that his party sympathized with the struggle of the Palestinians and that his presence at the airport to welcome Khaled was a sign of support from the ANC.

"We will continue to support them (the Palestinians) unequivocally. We have no apologies for our support," the minister said, saying it was "hard luck" for anyone who opposed the party's stance in this regard.

Khaled is a former member of the leftist Popular Front for the Liberation of Palestine (PFLP) who took part in two airplane hijackings between 1969 and 1970.

Khaled made history when an image of her holding an AK-47 rifle and wearing a Palestinian Kaffiyeh became an icon of Palestinian resistance to Israeli occupation.

"The South African Jewish Board of Deputies (SAJBD) protests the bringing out of terrorist Leila Khaled" by the South African chapter of the global Boycott, Divestment and Sanctions (BDS) campaign, a statement on the board's website read.

"We believe that by hosting Khaled over and above many other possible spokespeople who believe in negotiations and peaceful co-existence between Israelis and Palestinians, BDS is sending a clear message to our country of what they stand for," the statement asserted.

The BDS campaign, however, responded by saying they did not expect pro-Israeli activists to understand the reason for cherishing someone like Khaled, or even late leader Nelson Mandela, a South African icon of liberation.

The Palestinian activist arrived to a warm welcome by ANC icon Ahmed Kathrada and Gigaba at the airport.

Several Members of the ANC women's league, dressed in green and black, sang and chanted in praise of Khaled as she arrived.

"The Palestinians stood with us during the dark days of apartheid, so it's not a favor when we come here to welcome Khaled in huge numbers," Muhammed Desai of the BDS campaign told The Anadolu Agency at the airport.

He said they were humbled by the support they continued to receive from South African communities.

Khaled is expected to address a number of fundraising events for the BDS campaign in several cities during her stay in South Africa.

"I had to wipe the tears from my eyes because of all this love," Khaled said at the press briefing.

She said that, when South Africa got its freedom in 1994, to Palestinians, it meant they had a place to go to.

"Occupation is the worst form of terrorism," she said in reference to Israeli claims that she was a "terrorist."

Tamer Almassari, media and culture officer at the Palestinian embassy in Pretoria, echoed this sentiment.

"Twenty years ago, Nelson Mandela and Ahmed Kathrada were also accused of being terrorists," he pointed out.