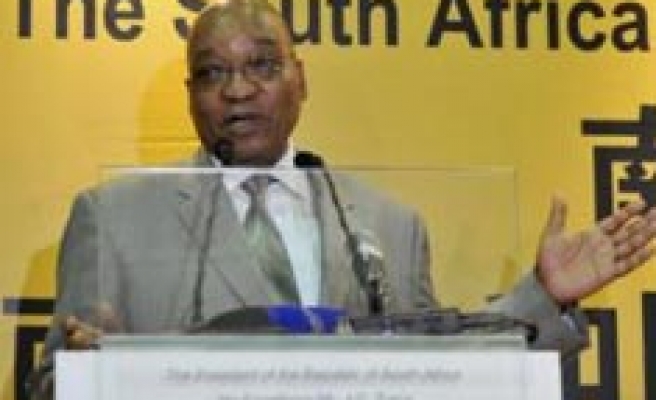 South African President Jacob Zuma faces a big challenge on economy when the ruling ANC meets to shape policies, notably on the strong rand and on left-wing calls for mine nationalisation.

The meeting of the African National Congress, which opened in the coastal city of Durban on Monday, marks one of the most important political events in years for the party, which has ruled since the end of apartheid in 1994.

The National General Council could leave Zuma weakened if he fails to hold on to old allies, who want left-leaning economic policies, or to win over some new ones.

With his term due to run until 2014. Former backers have threatened they may not support him for a second term, while economic growth looks set to slow in Africa's biggest economy, and a dispute that led to 1.3 million state workers going on strike has yet to be resolved.

One of Zuma's main tasks is to repair an alliance with the powerful labour federation COSATU, strained by a three-week state workers' that was suspended earlier this month, and union accusations of cronyism and corruption in his government.

Finance Minister Pravin Gordhan told delegates to the conference that the country has lost billions of rand through corruption.

Zuma will also need to fend off various rivals in the splintered ANC who are lining up to challenge Zuma at the next ANC leadership election in 2012. Due to the ANC's electoral dominance, that person is likely to be South Africa's next president.

The calls for mine nationalisation by COSATU and the ANC's Youth League are not likely to lead to any major change for a sector that accounts for about 6-7 percent of GDP, analysts said.

Mine nationalisation would place an enormous financial burden on the country. The Mail and Guardian newspaper cited cost estimates of at least 2 trillion rand ($280 billion), more than double the annual state budget.

Finance Minister Pravin Gordhan told Reuters in an interview on Monday that nationalisation was "not government policy", and that South Africa wanted "stable and competitive currencies".

The Durban meeting lasts until Friday. The next major event on the ANC calendar is the National Policy Council, including the leadership election, in 2012.