The Friday protests were called for by the pro-Morsi National Alliance and Egypt's Salafist Front, a component of the alliance. 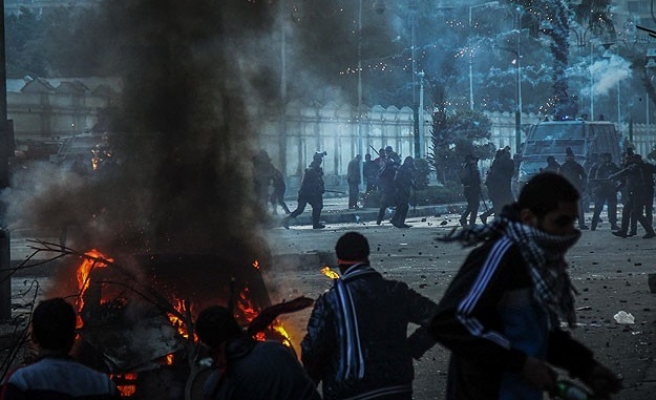 Two military officers were killed and four others wounded in two separate attacks that took place in Cairo and the northern province of Qalioubiya, according to a security source.

"An army brigadier-general was shot dead by unknown assailants in eastern Cairo and two other military personnel were injured in the attack," the source told The Anadolu Agency.

The source went on to say that another army officer had been killed in an attack by unknown assailants "while he was inspecting security forces in eastern Cairo's Abu Zaabal district."

A source from the National Alliance for the Defense of Legitimacy, Morsi's main support bloc, said one of the fatalities involved a pro-Morsi protester.

"Police and military forces used teargas and birdshot to disperse the protest, which led to the death of one protester and the injury of several others," the source said.

But Cairo security chief Ali al-Demerdash said the man had been killed by gunfire from Muslim Brotherhood supporters while leaving a mosque following Friday prayers.

"[The victim] was not participating in the protests," al-Demerdash told AA. "We have nothing to do with his death; we are showing self-restraint in dealing with protesters."

A second death was reported during clashes between protestors and other civilians, according to a security source.

A third civilian was killed when a police vehicle was targeted with a locally-made explosive device in the northern Sharqiya province.

The Friday protests were called for by the pro-Morsi National Alliance and Egypt's Salafist Front, a component of the alliance.

The ministry said in a statement that those detained were in possession of petrol bombs and fireworks.

The statement said that security forces had "dealt with and dispersed" the rallies.

According to the statement, eight improvised explosive devices had been defused in several provinces on Friday.

In another incident, an explosive device went off in the vicinity of Tahrir square in downtown Cairo without causing any injuries.

The explosion occurred as police were working on dismantling another bomb, according to an Anadolu Agency correspondent.

"An explosion took place near Abdel-Moneim Riyad Square [adjacent to Tahrir Square] without causing any damage while explosive experts were dismantling another bomb," a security source told The Anadolu Agency.

Security forces remain on high alert around Abdel-Moneim Riyad Square, according to an AA correspondent.

Egyptian state TV reported that a suspect on a motorbike had been arrested in connection with the incident, without stating his identity.

The protest calls have alarmed Egypt's security agencies, which have warned of potential violence by demonstrators.

The authorities – which have unleashed a broad crackdown on dissent, mainly targeting Morsi supporters – had threatened to use live ammunition against anyone who attacked state institutions during Friday's planned protests.

Morsi, the country first freely elected president and a Muslim Brotherhood leader, was ousted by the army last year following mass protests against his single year in office.

President Abdel-Fattah al-Sisi, a former army general who played a key role in Morsi's ouster, was declared the winner of a presidential election conducted in May.