Saleh calls for ceasefire after return to Yemen

Saleh unexpectedly returned to Yemen on Friday after three months in Saudi Arabia, calling for a ceasefire between his supporters and opponents. 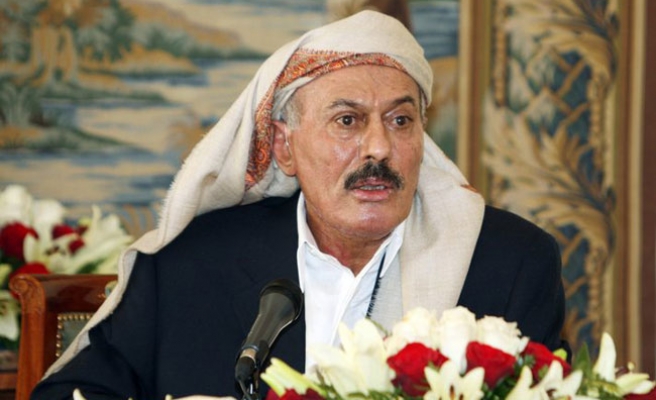 President Ali Abdullah Saleh unexpectedly returned to Yemen on Friday after three months in Saudi Arabia, calling for a ceasefire between his supporters and opponents after five days of fierce fighting in the capital.

Saleh's reappearance raised big questions over the future of the fractious Arabian Peninsula state, which has been paralysed by protests against his 33-year rule since January.

In New York, the United States said it wanted Saleh to step down, arrange a full transfer of power and allow Yemen to "move on".

Violence in the Yemeni capital Sanaa exploded this week, when a months-old standoff between loyalist troops and forces backing anti-Saleh protesters turned into a full-blown military showdown that killed more than 100 people in five days.

Moments after state television's announcement of his return from Saudi Arabia, where he had been recovering from severe burns received during an assassination attempt, the capital's streets erupted with bursts of gunfire and fireworks. Shelling was also taking place in the capital's Hasaba district.

Saleh called for a ceasefire so that talks could be held.

"The solution is not in the mouths of rifles and guns, it is in dialogue and stopping bloodshed," the defence ministry quoted Saleh as saying. But many Yemenis saw his return as an attempt to rally for war and said they now expected more bloodshed.

His return sharply divided Yemenis, with supporters joyfully predicting that he could restore order, and opponents saying they feared his presence would unleash bloodshed.

"I'm so excited," said Akram al-Aghbari, a doorman. "He is an honourable and great man. I know he's coming to stop this terrible violence. People here without him only know how to rule with weapons, but with him back, just you watch: he will return the country to what it was."

Abdulghani al-Iryani, a political analyst and co-founder of the Democratic Awakening Movement, said violence lay ahead.

"This is an ominous sign. Returning at a time like this probably signals he intends to use violence to resolve this. This is dangerous," he said. "His people will feel that they are in a stronger position and they will refuse to compromise. Basically this means the political process is dead in the water."

Supporters were ecstatic. Radio stations blared celebratory music and thousands gathered at a pro-Saleh rally waving flags, beating drums and honking horns. A newsflash on Yemen TV warned people not to fire into the air in celebration in case stray bullets hit bystanders.

Many Yemenis thought they had seen the last of Saleh when he flew to Saudi Arabia in June for medical treatment after a bomb explosion in his palace left him with severe burns.

Saleh had already been involved in negotiations mediated by neighbouring Gulf states to leave office, repeatedly promising to step down only to change his position at the last minute.

The U.S. said on Friday it wanted Saleh to sign the accord promoted by the Gulf Cooperation Council which envisages the president stepping aside.

"I can't believe he came back. He shouldn't have come back," said Yasser, a hotel cleaner. "Us regular people, we are so sick of all of them: the opposition and the government. Can't they see they're going to ruin this country?"

His return took by surprise opposition politicians, protesters and diplomats who has been entreating him to go.

"This initiative remains effective and Hadi will continue the dialogue to create a binding mechanism to implement the Gulf initiative," Yasser al-Yamani told al Jazeera television.

The Gulf initiative would see Saleh stand down three months after signing it. He has thrice agreed to earlier drafts of the deal only to back out of it at the very last minute.

A high level negotiator told Reuters he had not expected Saleh's return, but that dealing with the president face-to-face might make negotiation easier.

Aides to Saleh in Riyadh, where he had been staying with a large entourage in a lavish, marbled palace in a downtown neighbourhood, were more optimistic about his return this week.

Talking about the potential for violence if the president returned, one said: "it's already there and he will go and solve it."

Some analysts say Saudi Arabia, the regional power with greatest influence over Yemen, might not have let Saleh return unless a deal was likely.

"I'm sure he talked of his return with King Abdullah during their meeting [on Monday night]," said Ghanem Nuseibeh, an analyst and partner at Cornerstone Global consultants in London.

"The Saudis would want that if he goes, then any transition of power is in their interests and doesn't bring about an anti-Saudi government. If there wasn't anything for them they wouldn't have let him go."

Gulf Cooperation Council Secretary General Abdbullatif al-Zayani flew into Sanaa this week to try and resurrect the deal but left after two days with nothing to show for his efforts.

Saadaldeen Talib, a former opposition parliamentarian, said: "(His return is) quite awful actually. It makes it more likely the violence will continue. The whole situation will go out of hand... I don't know where it will end."