Saleh does not mention resign in first talk after return

Saleh reiterated his acceptance of a Gulf-proposed power transfer and said the vice-president retained authority to talk to the opposition. 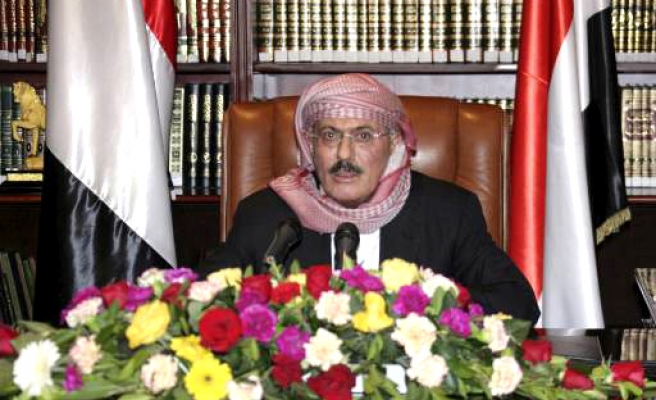 Yemeni President Ali Abdullah Saleh made no pledge on Sunday to step down in his first address to the nation since returning home, calling for early elections in a move that is unlikely to appease protesters demanding his immediate departure.

Saleh, speaking after the sixth day of a wave of violence in which more than 100 people have been killed, said in his speech he was committed to transferring power through elections.

But since the crisis began in January when protesters took to the streets demanding that he quit, the embattled president has made numerous proposals to end the violence but followed up on none that entail him surrendering power.

Protesters accuse Saleh, his family and the government of widespread corruption and failing to address crippling poverty and lawlessness in a land where one in two people owns a gun.

Saleh, who returned on Friday from Saudi Arabia where he sought treatment after a June assassination attempt, reiterated his acceptance of a Gulf-proposed power transfer and said the vice-president retained authority to talk to the opposition.

"Let's all go towards dialogue, understanding and peaceful exchange of power through elections and early presidential elections," he said in the televised speech.

A traditional checkered Arab headscarf was wrapped around Saleh's head and neck and an elaborate flower arrangement hid his hands, possibly to disguise the burns he sustained in the bombing of his presidential compound.

Protesters, huddled around television sets in the ramshackle tents of their large encampment in central Sanaa, shouted "Boo! Leave!" in disappointment at his remarks, which were similar to earlier speeches.

"We're so used to this speech, there's nothing new in it. He talks to us as if we're children," said 30-year-old protester Saeed as he stared blankly at the screen. "He's just talking and talking about this initiative but we haven't seen any action."

Shortly after Saleh's speech, the sky over Sanaa was peppered with bursts of fireworks and red embers from shots fired into the air by presidential supporters cheering "The people want Ali Abdullah Saleh!"

One protester pointed to the sky and said: "See, that is the dialogue that Saleh wants."

Protesters have grown even more wary of Saleh's intentions since some 17 people were killed on Saturday when government forces attacked their camp in Sanaa, according to witnesses and medics.

"This man just won't let go of power ... he's taunting us," said teacher Qassim al-Rumeity, 27, standing in a crowd of protesters shouting "The people want the fall of the murderer".

Gulf states have urged Saleh to end his 33 years in power and sign the Gulf-brokered power transition plan.

"We are at war in Yemen," said Yemeni analyst Hassan. "Every side is using everything it can ... I don't see good things coming, from either side."

Saudi Arabia's King Abdullah also called for the adoption of the Gulf plan and urged restraint. "We believe the Gulf initiative is still the only way out of the Yemeni crisis," he said in published remarks.

Diplomats and Yemeni politicians watching Saleh's speech saw little to indicate that this time he was near signing a deal.

The U.N. Security Council urged Yemen on Sunday to allow more access to humanitarian aid. Doctors treating protesters say they are running low on medicine and the International Committee of the Red Cross says its workers have been threatened and assaulted.