Yemeni President Ali Abdullah Saleh has authorised his vice president to sign a power transition plan after a dialogue with the opposition, the state news agency Saba said on Monday. 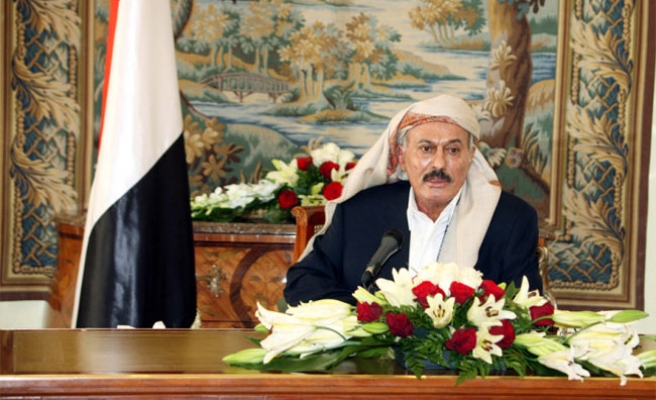 Yemeni President Ali Abdullah Saleh has authorised his vice president to sign a power transition plan after a dialogue with the opposition, the state news agency Saba said on Monday, a move that could hasten the end of Saleh's 33-year rule.

Yet the main political opposition coalition, impatient with Saleh's repeated earlier refusals to sign the Gulf-brokered pact, expressed scepticism with the presidential decree, which called for yet more talks before any signing.

"(The vice president) is given the necessary constitutional authorities to conduct a dialogue with signatories of the GCC initiative and agree on a lasting mechanism to implement and sign it on (Saleh's) behalf under regional and international auspices, resulting in early presidential elections," it said.

Saleh, 69, has been recuperating in Saudi Arabia since he was severely wounded in a bomb attack in June. He had backed out of signing the transition deal three times before the assassination attempt inside his presidential compound.

Months of fruitless negotiating had frustrated tens of thousands of anti-Saleh protesters as daily demonstrations and sporadic clashes paralysed the impoverished Arab state.

"This is enough to ensure that the Gulf initiative is implemented and that early presidential elections are held, and will safeguard Yemen from armed conflict," said Ali Seif Hassan.

But the opposition coalition, the Joint Meetings Party (JMP) appeared wary of the conditions set by Saleh's decree.

"Any talk of a dialogue before signing the Gulf initiative is either an attempt at wasting time or deceiving public opinion," said JMP spokesman Mohammed Qahtan.

The coalition vowed that mass protests would continue.

"The JMP calls on the young men and women of the revolution to continue escalating the peaceful revolution until the whole regime falls," it said in a statement.

Saleh's formal departure may still be months away even if the transition agreement goes through.

Under modifications recently agreed under a U.N.-mediated "operational mechanism", he would transfer powers to his vice president, after which presidential elections must be held within three months.

But as Saleh has only transferred authority for negotiating the transition deal, it appears that the three-month period will only kick off once Hadi signs the GCC plan in his stead.

If the deal is signed, a newly elected president, expected to be Hadi, would head a two-year interim unity government that would draft a new constitution and negotiate with Shi'ite Muslim rebels in the north and armed separatists in the south.