Kenyan media put the toll higher, saying more than 100 people were burnt to death and a similar number were taken to hospital in one of the worst fire disasters in the east African country. 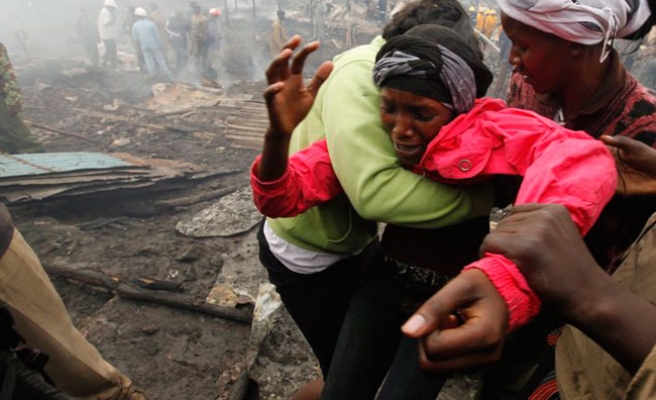 At least 61 bodies have been recovered after petrol that had spilled into an open sewer caught fire and sent a wave of flame through a densely populated slum in the Kenyan capital, police said on Monday.

Kenyan media put the toll higher, saying more than 100 people were burnt to death and a similar number were taken to hospital in one of the worst fire disasters in the east African country.

Police said a large number of people had perished and it was proving difficult to establish the exact figure because some charred remains were found huddled in groups.

Residents said petrol spilled from a fuel depot owned by the Kenya Pipeline Company and ran into a sewage dyke that runs under the slum, which is known as Sinai. The petrol ignited, causing an inferno that left charred corpses and burnt skeletons.

"We have confirmed 61 dead so far, but we are retrieving more," deputy police spokesman Charles Owino told Reuters.

Owino said the fire was ignited by a cigarette butt that was tossed onto the dyke, which opens into a small river.

Authorities said they were battling the fire before completing the count on the death toll in an area that police estimated to be just over an acre in size.

Local television channels aired images of smouldering skeletons as the fire raged through the slum covering an area police said was about one acre.

Children in school uniform ran in all directions, crying. Badly burnt slum dwellers staggered in a daze, skin peeling off their faces and arms.

Prime Minister Raila Odinga visited the scene of the fire and promised help for the victims of the fire.

"The government will do everything possible to ensure the injured will be treated and the families who have lost their loved ones will be compensated," said Odinga who spoke through the sun-roof of his 4x4 vehicle at the scene of the fire.

Police said some of the residents of the slum were killed while trying to scoop up the fuel from the burst pipe and from the sewer.

"The scene is bad, there is a large number of people burnt to death," Owino said.

"There are many bodies, we are yet to count them. Sometimes poverty can push you to do very dangerous things."

Abandoned jerry cans half filled with petrol littered the scene where dozens of fire trucks and ambulances tried to make their way through the large crowd that gathered at the scene.

Firefighters scrambled across the corrugated rooftops of burning shacks to spray foam on petrol that flowed down the slum's muddy alleyways. Others pulled off the iron sheet rooftops to gain more access into the slum.

Fire trucks sprayed more foam to quench the inferno, while ambulances ferried dozens of injured to nearby hospitals.

"There is an informal school inside the slum, they have all been burnt," Daniel Mutinda, a spokesman the Kenya Red Cross, said.

In a similar accident about 120 people died when a crowd scrabbling for free fuel crowded round a tanker that crashed near the Rift Valley town of Molo in January 2009. A cigarette set off the blaze, which engulfed the crowd.

One of the residents of the slum said people had rushed to fill their jerry cans with free petrol before the explosion.

"I was going to the loo down by the river just after 4am when I saw the gold flowing from the pipe. I ran home and grabbed two jerry cans and went back to fill them up. As I finished and turned away there was a boom as the fuel ignited," said Sammy Njenga, a 21-year-old unemployed slum dwellers.

"I could feel the flames on my back and dropped one can so I could run further. But it spread so fast I dropped the other as well," he said. "I had been standing next to a mother of three who wasn't fast enough. She died."