The U.N. refugee agency (UNHCR) said that around 70 Eritrean refugees were currently entering Ethiopia on a daily basis. 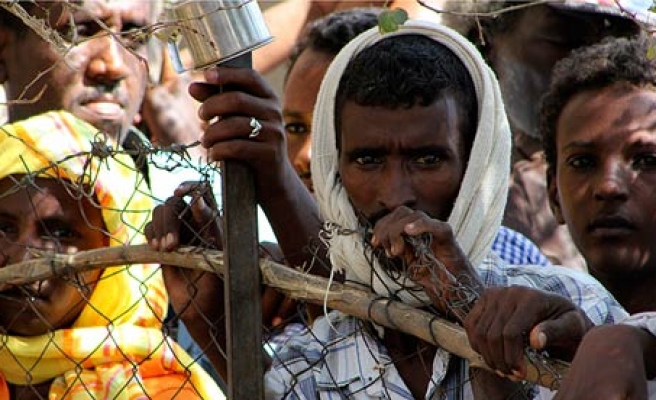 The U.N. refugee agency (UNHCR) said on Wednesday that around 70 Eritrean refugees were currently entering Ethiopia on a daily basis.

"Eritrean refugees came to Ethiopia and continue to do so fleeing oppression and forced military service," Kisut Gebre Egziabher, a spokesman for the UNHCR's Ethiopia office, told Anadolu Agency on Thursday.

"As of the end of April, the total number of Eritrean refugees in Ethiopia reached 93,000," he added.

Eritrea and Ethiopia used to be a single country, but a 1993 referendum saw Eritreans vote for independence. Tension between Addis Ababa and Asmara and has persisted since a bloody two-year border war, in which tens of thousands were killed, ended in 2000.

Due to the historical relationship between the peoples of Ethiopia and Eritrea, Egziabher said, refugees from the latter were free to live outside the camp with their Ethiopian relatives.

According to Egziabher, the UNHCR has a way of making the lives of Eritrean refugees in Ethiopia more permanent, because they can't return to their homeland due to safety concerns.

"Wherever refugees can return safely to their countries of origin, the UNHCR prefers reintegrating them – which is not the case concerning Eritrean refugees," he said.

"UNHCR thus has a special out-of-camp policy for Eritrean refugees that includes scholarships locally or third-country relocation that allows for asylum in Europe or in America," he added.

"This depends, however, on the willingness of the recipient countries," he went on to say. "Since 2006, most of the 6000 Eritrean refugees sheltered at Kebribeyah camp have left for the U.S. under an asylum privilege provided by that country."

Egziabher pointed out that refugees arriving from Eritrea were different from those coming from Somalia or South Sudan, where conflicts have forced thousands of refugees into neighboring Ethiopia.

"Unlike refugees coming to Ethiopia from other countries, most Eritrean refugees are able-bodied young men," he explained. "They are educated as well."

"Refugees coming from other countries are mostly women and children," he said.

Eritrean refugees have also sought shelter at two camps in the northeastern Afar Regional State: the Berhaile Camp and the Aysaitta Camp. There are also Eritrean refugees living in small villages in Ethiopia.

Meanwhile, Egziabher puts the number of Somali refugees in Ethiopian refugee camps at some 240,300.

"They flee conflict and drought in their country at various times," he said.

There are currently eight refugee camps for Somali refugees in Ethiopia, the oldest being the 23-year-old Kebribeyah Camp, which accommodates refugees who fled strongman Siad Barre's rule.

The Awbere and Sheder refugee camps are also relatively old, having been set up in 2007 and 2008 respectively.

The Bekolmanya, Melkadida, Kobe, Hilawein and Buramino refugee camps, meanwhile, were all established in 2009. They accommodate refugees who fled the rules of the Council of Islamic Courts and Al-Shabaab and the intermittent droughts that have occurred in the region, said Egziabher.

Tigrians (Northern Ethiopia) speaks the same language as Eritrean,So Tigrians are claiming to UNHCR that they are Eritreans and want to use this apportunity to go to abroad.Almost 50-70% of them are Ethiopians(Tigrians) not Eritreans.