Scuffles outside, tussles inside Mubarak trial

Police broke up a tussle inside the chamber between lawyers, plaintiffs and supporters of the deposed Egyptian leader. 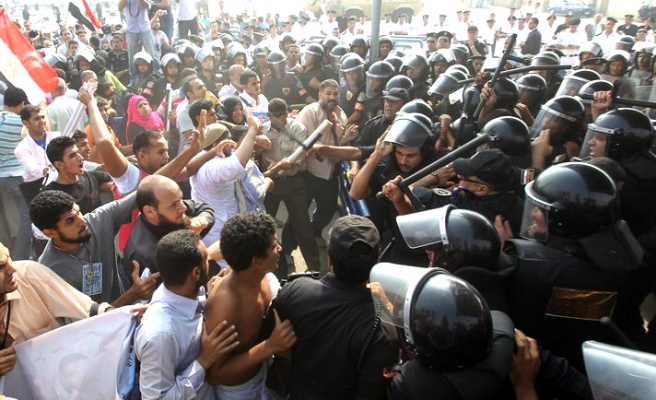 Demonstrators scuffled on Monday outside a Cairo court where former president Hosni Mubarak attended a hearing in his trial and police broke up a tussle inside the chamber between lawyers, plaintiffs and supporters of the deposed Egyptian leader.

Mubarak, 83, in hospital since April with heart problems and other reported ailments, was wheeled on a gurney into a metal defendants' cage in the court where senior policemen were due to give the first witness testimony.

A longtime ally of the United States, Mubarak charged with corruption and involvement in the killing of protesters in the three-week uprising that toppled him in February.

He is the first Arab leader to stand trial in person since popular revolts started sweeping the Middle East this year.

Judge Ahmed Refaat banned live television coverage of the trial in the Cairo Police Academy after the first two sessions when Egyptians watched riveted as their former president lay behind bars.

The trial has stoked tension between those who brought Mubarak down after three decades in office and his supporters.

Inside the court, people present said a fight broke out when a Mubarak supporter lifted up a photo of the former president, angering relatives of victims of the uprising. Lawyers for plaintiffs also entered the fray.

Police step in to separate them, those in court said.

Agitation inside the court prompted the judge, who had been due to listen to testimonies of police witnesses, to call a recess, according to Egyptian state television.

Outside, anti-Mubarak protesters hurled stones at police lines and some officers threw rocks back. At one point police with shields and batons charged a group of demonstrators.

"He has to be hanged. We don't want any more delays in the court session," said Mohamed Essam, who had travelled to Cairo from the Nile Delta town of Kafr el-Sheikh.

A man with blood on his face shouted: "I call on the free Egyptian people, the youth of the revolution, to see what state security is doing with the revolutionaries."

Nearby, supporters held up posters of the ex-president and chanted: "He gave us 30 years of protection, Mubarak hold your head up high."

"We are expecting to hear the testimony of four witnesses that the prosecution has asked to prove the charges against Mubarak and the others," said Gamal Eid, a lawyer representing 16 of some 850 people killed in the uprising against Mubarak.

Eid said one witness was a top police officer, General Hussein Saeed Mohamed Mursi, who worked in the police operations room during the uprising. Eid said Mursi had been accused of deleting recordings of what happened in the room at that time.

"(Mursi) had been accused in a decision issued by the general prosecutor of deleting those recordings but he later turned into a witness," Eid said.

The three other witnesses to be called by the court are police officers who were in the operations room during the 18 days of protests. The court named them as Emad Badr Saeed, Bassim Mohamed el-Otaify and Mahmoud Galal Abdel Hamid.

Lawyers said the decision to ban live television coverage would prevent witnesses being influenced by each other or the public.

Mubarak is on trial with his sons Gamal, once seen as a future president, and Alaa, a businessman, as well as former Interior Minister Habib al-Adli and six police officers.

Ten Kuwaiti lawyers said they were joining the defence team for Mubarak on Monday. Al Jazeera television said that they had not been allowed into the court when the trial began.

Some of the Kuwaiti lawyers said they were making a gesture of gratitude to Mubarak for his support for a U.S.-led coalition that expelled Iraqi forces from Kuwait in 1991.

A news conference held by the Kuwaiti lawyers on Sunday descended into chaos when supporters of Mubarak attacked a journalist, scratching his arms and beating him after he asked why the Kuwaitis were defending the ousted president.