A soldier stamped on the lifeless body, which was then dragged nearly naked through the streets as residents looked on and took photographs. 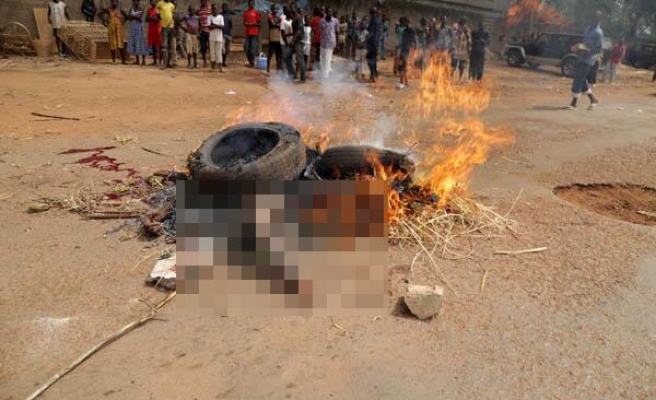 A group of soldiers in Central African Republic's capital lynched a man they suspected of having been a rebel.

A Reuters witness saw about 20 uniformed soldiers accuse a member of the crowd of having belonged to Seleka, the mostly Muslim rebel group that seized power in a coup last March, before stabbing him repeatedly until he was dead.

A soldier stamped on the lifeless body, which was then dragged nearly naked through the streets as residents looked on and took photographs.

Ten minutes earlier, about 20 metres away, the new interim president, Catherine Samba-Panza, had addressed the crowd of at least 1,000 soldiers at a ceremony meant to re-present the army to the nation after it effectively disappeared from view during nine months of Seleka rule.

"Within a month, I would like to fully secure the greater part of the country, and I aim to stick to my word," she told the gathering at a training centre.

The Seleka, disbanded after Samba-Panza's inauguration last month, is deeply resented by the Christian majority for months of lootings and killings.

The violence spawned the creation of Christian "anti-balaka" militias, meaning "anti-machete" in the local Sango language, and more sectarian blood-letting.

About 1 million people, a quarter of the former French colony's population, have fled their homes.

The presence of 1,600 French soldiers and 5,000 African troops has so far failed to stop the tit-for-tat violence, which the United Nations says has already killed more than 2,000 people.

Peter Bouckaert, emergencies director at Human Rights Watch in Bangui, tweeted that the corpse of the lynched man had been burned. He posted a photograph showing a man holding up a severed limb next to a bonfire, as an armed French soldier gestured in the background.

Samba-Panza, appointed by parliament two weeks ago after coup leader Michel Djotodia stepped down under intense international pressure for failing to stop the violence, made clear it would take time to restore order:

"At a certain point, everyone will be held responsible for their acts, I am warning troublemakers who continue to sow disorder in the country."

She also urged former soldiers to report for duty, saying those who did not would be considered deserters.

Central African Republic, one of Africa's poorest countries despite mineral riches, has a history of instability, and has seen five coups and several rebellions since winning independence from France in 1960.

According to a timetable established as part of a regionally brokered peace deal agreed last year, elections are supposed to be held by February 2015.