Whilst Shell claimed that 1,640 barrels of oil were spilled in total, experts consulted by a UK legal firm representing Bodo community insisted that 4,000 barrels were spilled daily 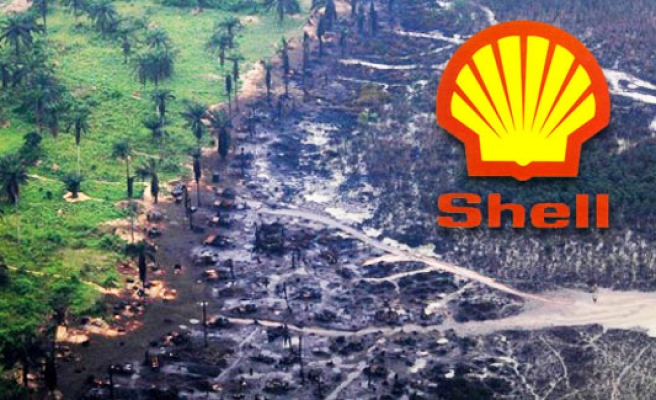 Negotiations between the oil giant Shell and Nigeria's Bodo community for out-of-court settlement over two major oil spills in 2008 have collapsed, sources knowledgeable about the issues confirmed to Anadolu Agency on Friday.

A spokesman for the multinational company, Joseph Obari, revealed that Shell has offered to pay the community N7.5b ($46,875,000) compensation as well as begin immediate clean-up of the creek devastated by months of oil spills.

"The community has rejected the offer. We did so after consultations on Wednesday and Thursday," Nenin Bari Zabbey, a representative of the civil society at the negotiation, told Anadolu Agency in a telephone interview.

"We couldn’t have a meeting point," Zabbey said.

Another community source confirmed the breakdown of negotiations.

"It is true that the community has rejected the Shell offer," Celestine Akpo Barie, an environment rights activist close to the talk, told AA from Port Harcourt, the capital of the oil-rich Rivers State.

"Our lawyers will communicate our rejection of the offer to their counterparts from Shell," Zabbey said.

The first spill occurred on August 28 and did not stop until November 7.

The volume of spill is disputed.

Whilst Shell claimed that 1,640 barrels of oil were spilled in total, experts consulted by a UK legal firm representing Bodo community insisted that 4,000 barrels were spilled daily between August and November.

Shell admitted responsibility, saying the spill was caused by "weld defect" on the oil pipes.

The second spill of December 7 lasted until February.

Shell, Nigeria’s National Oil Spill Detection and Response Agency (NOSDRA) and the community’s representatives did a joint investigation of the spill.

It was agreed by all parties, including Shell, that the second spill was worse than the first.

Shell said the second spill was caused by equipment failure as a result of natural corrosion.

A report by the Amnesty International said the scale of spill being claimed by the community is confirmed by satellite images the global anti-graft watchdog obtained, analyzed by the Geospatial Technologies and Human Rights Project of the American Association for the Advancement of Science.

NOSDRA law mandates that clean-up of oil spills should commence days after the incident, but the Bodo spill has not been cleaned up almost five years after the devastating occurrence.

"Our lawyers will communicate our rejection of the offer to their counterparts from Shell," Zabbey said.

On Thursday night, Obari said Shell was awaiting the position of the community on the offer made to them.

"We took part in this week’s settlement negotiations with two objectives – to make a generous offer of compensation to those who have suffered hardship as a result of the two highly regrettable operational spills in 2008, and to make progress in relation to the cleanup," he told the News Agency of Nigeria (NAN).

"We await the community’s response to our compensation proposal, and we’re pleased to have made progress in relation to the cleanup."

A previous round of compensation talks broke down in 2012.

"Since we have failed to reach a consensus the court will of course be the final arbiter," asserted Zabbey, the head of the Centre for Environment, Human Rights and Development (CEHRD), the group that facilitated the London legal case.

In April 2011, the community filed a legal suit in London seeking to compel Shell to take full responsibility for the spills, clean up the environment and pay compensations for their loss.

People of Bodo are predominantly farmers and fishermen.