Since Morsi ouster, many Egyptians see no change

Having wholeheartedly supported Morsi's ouster, some Egyptians have been put off by the subsequent anti-Muslim Brotherhood crackdown 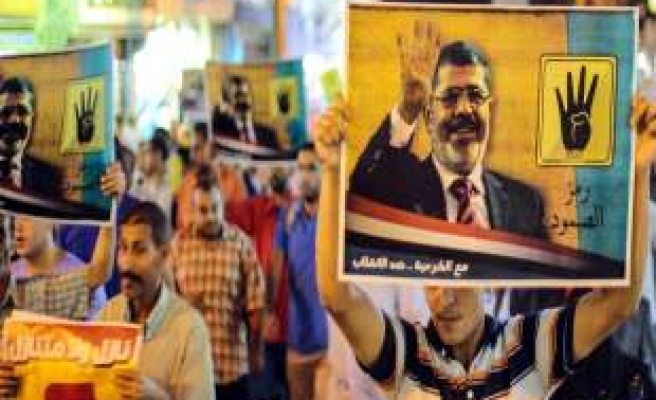 When calls to demonstrate against Egypt's first freely-elected President Mohamed Morsi were made, Mohamed Shakir, a street vendor in his early thirties, was one of the first to descend on Tahrir Square for the anti-Morsi rallies on June 30.

But three months after Morsi's ouster by the powerful military, Shakir does not believe the country is changing for the better.

"Morsi was a total failure," Shakir told Anadolu Agency. "He was not fit to rule and couldn't do anything good for the people of this country."

That's why Shakir joined the hundreds of thousands who flocked to Tahrir on June 30 to demand Morsi's removal.

Three days later, the army – describing the move as a response to the "popular will" – overthrew the elected president, suspended the constitution and installed an unelected interim president.

But now, three months on, Shakir complains that the country has not seen any improvement.

"I know Egypt's problems won't be solved in the blink of an eye," he asserted. "But the reality is that nothing good has happened within the last three months."

"True, Morsi was not good at all, but Egypt isn't any better now," he said.

Having wholeheartedly supported Morsi's ouster, some Egyptians have been put off by the subsequent anti-Muslim Brotherhood crackdown, which has seen hundreds of protesters killed.

Many are pessimistic about the future with the heavy hand of Egyptian security agencies being felt – yet again – across the country. Meanwhile, the economy appears to have further deteriorated, adversely impacting the country's most vulnerable social segments.

Shakir said that a policeman had recently fabricated charges against a friend of his because the latter had dared to object to the policeman's "arrogant" behavior.

His friend was later arrested and referred to prosecutors before being later released on bail set at 500 Egyptian pounds (roughly $70).

"The same thing used to happen before the January 25 [2011] revolution that toppled Hosni Mubarak," Shakir recalled.

"That's why I have the feeling that the merciless Mubarak-era police state has made a strong comeback," he added.

While some observers disagree with Shakir's assessment that Mubarak's police state is again rearing its head, many others agree.

The three months since Morsi's ouster have seen hundreds of Muslim Brotherhood members and sympathizers detained on charges of "inciting violence" and destroying churches and public and private property.

Although by no means a Morsi supporter, Shakir is nevertheless dead-set against any return of the military to the country's fraught political stage.

He believes that freedom, democracy and free speech are alien concepts to the army.

"If it comes to power again, the army will not give Egyptians much, except for bread," Shakir said.

According to 28-year-old deliveryman Tamer Gad, many Egyptians can no longer even afford bread, given the country's dire economic position.

"I can see with my own eyes how some people who used to be wealthy are now sliding into poverty," he told AA.

Having worked for a well-known Cairo food chain for years, Gad says he has never seen worse days.

A few years ago, he recalls, most customers would tip him when he made deliveries. But this, he lamented, was no longer the case.

"Customers who used to give me tips can no longer afford to do so," he said. "Other customers have stopped making orders altogether."

With a high fiscal deficit and a gross public debt equaling nearly 100 percent of GDP (as of the end of June 2013), Egypt's economic growth remains "weak," the World Bank said in September.

Gad asserts that, if the country's economic situation continues to worsen, not everybody will be able to keep his or her silence.

"Some people are coming to discover that the repeated ousting of presidents isn't making people's lives any better," he said.

"On the contrary," he added, "many people are paying dearly for it."