"The leadership of the Interior Ministry knew that Morsi would not stay on, as the police would never accept a civilian president – especially an Islamist one," al-Gohari told the Qatar-based broadcaster. 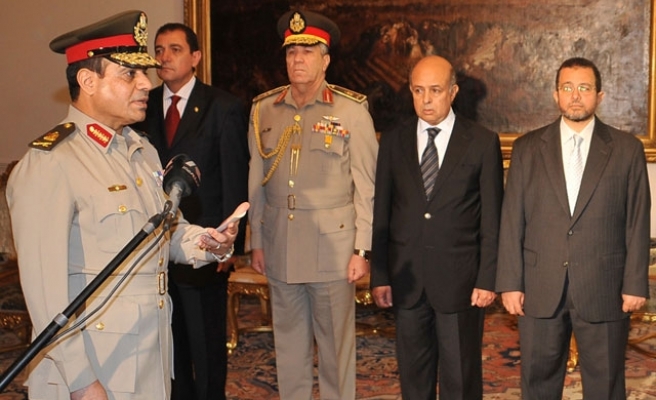 A police officer who had been tasked with securing the Cairo residence of ousted Egyptian president Mohamed Morsi has revealed that Defense Minister Abdel-Fattah al-Sisi was the one who first tipped Mohamed Ibrahim for interior minister – a post he retained following Morsi's July 3 ouster by the military.

Brigadier-General Tarek al-Gohari, who served as head of security (night shift) outside Morsi's home in New Cairo when the latter was president, told Al Jazeera Mubasher Misr on Monday that al-Sisi had told Morsi: "I will select your interior minister to ensure that the two [security] apparatuses – the police and army – remain under your control."

But this, al-Gohari said, was not to be the case.

"The leadership of the Interior Ministry [which runs the country's sprawling police apparatus] knew that Morsi would not stay on, as the police would never accept a civilian president – especially an Islamist one," al-Gohari told the Qatar-based broadcaster.

Morsi formally appointed Ibrahim in January, six months before his ouster by the military following massive and well-coordinated demonstrations against his presidency.

According to al-Gohari, reports about the influence of the Muslim Brotherhood on Morsi during the latter's one year in office were vastly exaggerated by the Brotherhood's political opponents.

"I only saw the supreme guide [Mohamed Badie] visit Morsi once, after the president had suffered a slight injury during Ramadan," he recalled.