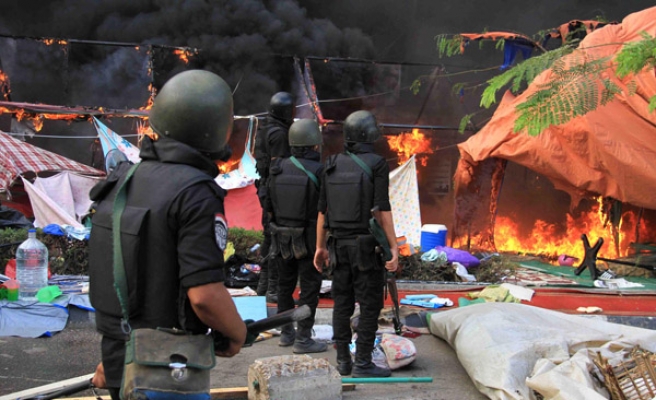 President Abdel-Fattah al-Sisi referred a report about the events that followed last year's ouster of president Mohamed Morsi to the cabinet for review, the presidency said.

Presidential spokesman Alaa Youssef added in a statement on Sunday that al-Sisi had met earlier in the day with the members of a fact-finding commission into the events.

He said the Egyptian President had received the report during the meeting and referred it to the cabinet for review.

Youssef noted that the cabinet would then refer the report to judicial authorities and other relevant government agencies so that they could take action based on its findings.

The panel, led by former judge Fouad Riyad, is expected to announce the main findings of the report during a press conference on Wednesday.

In September, al-Sisi agreed to extend the panel's mandate by two months, giving its members November 21 as a deadline to finalize the report.

Riyad said that his commission had received new photos and videos from different parties, including eyewitnesses of the dispersal of two major pro-Morsi sit-ins in Cairo in August of last year, as well as the Interior Ministry and the general prosecution.

Panel Secretary-General Omar Marwan said previously that the report contained 800 pages and that it was based on a review of thousands of documents and photos.

The Muslim Brotherhood, for its part, refused to cooperate with the panel, expressing suspicions over its independence.

The panel was formed in December of last year by then interim president Adly Mansour.

Hundreds of pro-Morsi protesters were killed and thousands, including Morsi himself, put in jail since his ouster in July of last year.

Scores of security personnel were also killed in a spate of attacks that followed the dispersal of the two pro-Morsi sit-ins.