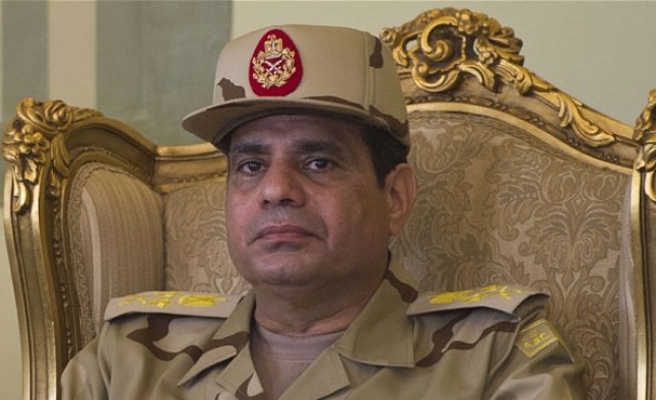 Egyptian President Abdel-Fattah al-Sisi said that his country has never made "offensive" statements against Turkey or Qatar.

"Egypt has never made any official statements that were offensive to Qatar or Turkey," al-Sisi said in an interview with London-based Asharq al-Awsat newspaper that was published Saturday.

In November 2013, Turkey and Egypt reciprocally downgraded their diplomatic relations to the level of charge d'affaires and recalled their ambassadors from both capitals.

Egypt, meanwhile, had accused Qatar of interfering in its affairs by supporting the Muslim Brotherhood – the group from which Morsi hails – and by hosting a number of wanted Brotherhood figures following Morsi's ouster.

Cairo has been especially irked by Doha's view of political developments in Egypt, and what it describes as biased news coverage by Qatar's Al-Jazeera Mubasher Misr channel – devoted to covering Egypt news – which was later closed.

An inter-Gulf initiative, however, has sought to break the ice between Cairo and Doha. While the Saudi-sponsored initiative seeks to normalize relations between Egypt and Qatar, Egypt says the ball remains in Qatar's court.

Al-Sisi said that his country is committed to the "Riyadh agreement" to improve relations with Qatar.

"We are still committed to the Riyadh agreement, in appreciation of Saudi Arabia and its role," he told the newspaper.

Al-Sisi is expected to visit Saudi Arabia on Sunday for talks with King Salman bin Abdulaziz.

"Relations between Egypt and Saudi Arabia are strategic and a pillar for security and stability in the Middle East region," he said.

When asked whether it would be possible for the Muslim Brotherhood to return to politics, al-Sisi said that the issue is "up to the Egyptian people."

"Whatever the people approve I will implement it right away," he said.

Egyptian authorities have launched a harsh crackdown on the Muslim Brotherhood following Morsi's ouster, arresting almost the entire leadership and thousands of supporters.

In late 2013, Egypt branded the decades-long Brotherhood a "terrorist" group.

Regarding his view for the future of the Arab region, al-Sisi warned that the region is at its "weakest point" and is in "real danger".

"If Egypt collapses, the region will be at a war for at least 50 years," the Egyptian president warned.

Al-Sisi renewed his call for forming a joint Arab force to combat Daesh, adding that Egypt has been in contact with "brotherly" nations regarding the matter.

Daesh is the Arabic acronym for the ISIL militant group, which last year overran vast swathes of territory in both Iraq and Syria.

"In our view, the first step towards destroying Daesh is through Arab unity and full cooperation in all fields," he said.