SLA says 'dozens killed' in Sudan's Darfur, no confirmation yet

Armed men killed dozens of people in attacks on a busy market and surrounding villages in Sudan's Darfur region on Thursday and Friday, rebels said. 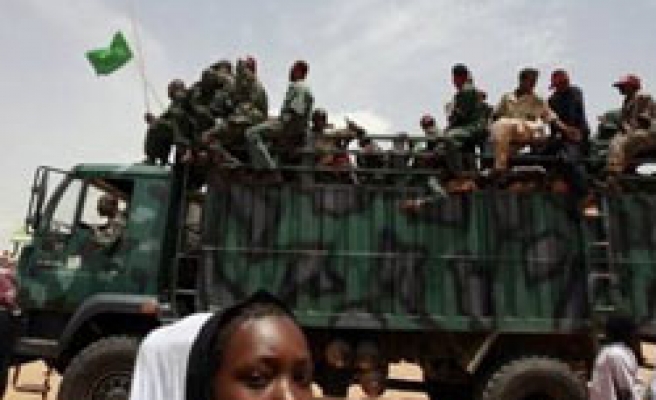 Armed men killed dozens of people in attacks on a busy market and surrounding villages in Sudan's Darfur region on Thursday and Friday, rebels said.

The Sudan Liberation Army (SLA) accused the Sudanese army of attacking the settlements west of the town of Tawila in North Darfur state, more than seven years after fighting broke out in the arid western region.

The joint U.N./African Union (UNAMID) Darfur peacekeeping force told Reuters it had unconfirmed reports that men on horses and camels rode into a market in the settlement of Tabarat on Thursday afternoon and opened fire on the crowd.

Sudan's army denied on Friday attacking any villages. But its spokesman told the state-linked Sudanese Media Centre that the military had clashed with bandits in the area, killing 27 of the thieves, without giving details of the date or exact location of the fighting.

Violence erupted in Darfur in 2003 when the SLA and other mostly non-Arab rebels took up arms against the government, accusing it of neglecting the region's development.

The fighting, which has rumbled on despite international sanctions and high-level peace campaigns, intensified in May when the separate rebel Justice and Equality Movement (JEM) suspended its participation in peace talks.

"From yesterday (Thursday) at 2 p.m. the government attacked the area around Tabarat, Maral and Hashaba with troops in Land Cruisers and air forces, and bombing carried on up to this morning," said Ibrahim al-Helwu, from the arm of the SLA loyal to Abdel Wahed al-Nur, who is also boycotting the talks.

"Fifty-four people were killed and 172 people were injured, most of them civilians ... This area is under our control," he added.

UNAMID spokesman Chris Cycmanick said the force had unconfirmed reports of around 45 deaths in the market.

"Our security received reports that armed men on camels and horses rode into the market area and indiscriminately began firing upon civilians," he said.

UNAMID sent a battalion of Rwandan soldiers to the scene but the SLA was refusing to let it approach, he said.

A U.N. source said there were reports that most of the casualties were from the non-Arab Fur tribe and were living in a refugee camp.

Sources from aid organisations, who asked to remain anonymous, told Reuters they had also received reports of an attack northeast of the largely rebel-held, mountainous Eastern Jabel Mara region.

"We heard the village of Tabarat was attacked. But nobody knows why. Nobody knows by whom," said one aid official.