Slain officer in Cairo blast 'was witness in Morsi trial' 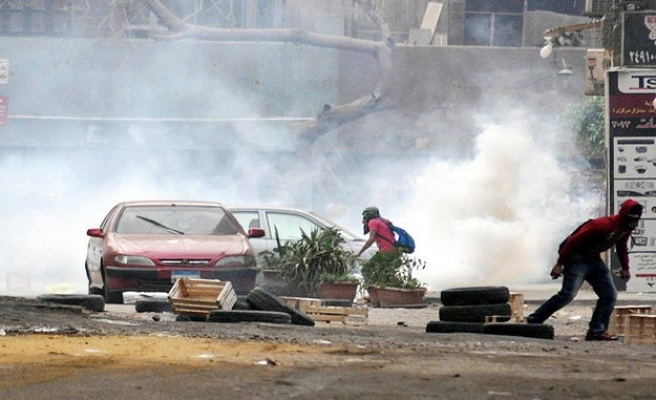 One of three policemen who was killed in an explosion in Cairo earlier Sunday was a prosecution witness in the trial of ousted Egyptian president Mohamed Morsi and dozens others charged with breaking out of jail in 2011, a judicial source said.

Mohamed Abu Sarie was killed along with another two policemen in an explosion that took place meters away from the Foreign Ministry headquarters in downtown Cairo.

According to the judicial source, Abu Sarie delivered his testimony in the trial on June 28. It was not clear if he was targeted or just happened to be at the site of the explosion.

Ajnad Misr, the militant group that carried out the last significant attack in Cairo, claimed responsibility for the blast in a statement posted on their official Twitter account.

"This new operation shows we can penetrate and reach the vicinity of the Ministry of Foreign Affairs...to destroy the officers of the criminal security agencies and make them taste some of what they have made Muslims taste," it said.

"Operations of retribution and revenge by this blessed group will not stop," said the group, whose name means Soldiers of Egypt.

Morsi, along with 130 co-defendants, is accused of taking part in a mass jailbreak during Egypt's January 2011 uprising that led to Mubarak's ouster.

Only 26 defendants, including Morsi, are in custody, while another ten are being tried in absentia.

Morsi, Egypt's first democratically elected leader, was ousted by the military last summer – after only one year in office – following protests against his presidency.

Assistant Interior Minister Abedl-Fatah Osman told reporters that an initial investigation showed that an explosive device attached to a tree was detonated when security forces reached at the checkpoint site.

The last significant attack in Cairo was on June 30, when two policemen died trying to defuse bombs planted by militants near the presidential palace.

Sunday's blast caused a tree to fall on a car. Blood stained a busy intersection beside a crowded market.

Meanwhile, an Egyptian court has adjourned to October 1 the trial of ousted president Mohamed Morsi and 130 others charged with breaking out of jail in 2011, a judicial source has said.

Judges postponed trial proceedings in order to summon witnesses for testimony at the defense team's request, the source added.