Somalia's famine refugees, weakened by months of drought, on Monday began Ramadan fast amid the tents and shacks of the world's largest refugee camp. 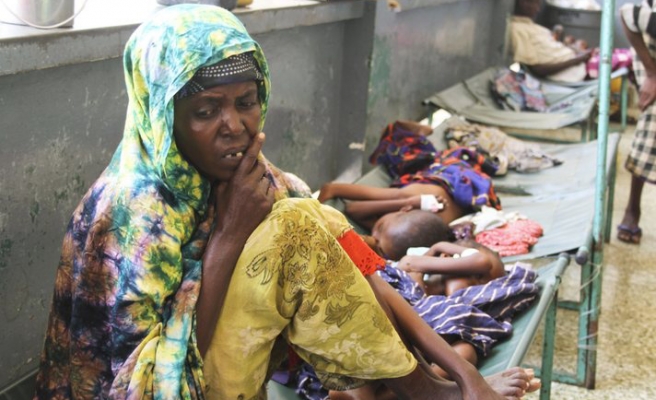 Somalia's famine refugees, weakened by months of drought, on Monday began Ramadan fast amid the tents and shacks of the world's largest refugee camp.

"Because of the famine, we've been going for days without any food anyway," said 25-year-old Mohamed Dubow Saman, comforting his daughter outside their emergency shelter in Dadaab camp, just over Somalia's border in neighbouring Kenya.

"That was a fast without reward. At least this fast is inspired by God," he said.

Sick people do not have to keep the fast during the holy Muslim month of Ramadan. But most camp-dwellers, caught up in the severest drought to hit the Horn of Africa in decades, appeared determined to keep their belief.

As the sun sank below the horizon late on Sunday, bathing Dadaab's makeshift city in a deep orange hue, Saman scanned the sky for the first sight of the crescent moon, which would mark the start of the month-long fast.

Like millions of fellow believers across the world, Saman was prepared to go without food or water from dawn to dusk and wait until night to eat his meagre rations.

Ramadan comes at a tough time for the Horn of Africa's Muslim population. In parts of the drought-prone region the rains have failed for four straight years, pastoralists say.

The United Nations has warned the whole of southern Somalia is slipping into famine. In all, more than 12 million people are affected across the Horn.

Somali President Sheikh Sharif Ahmed has embarked on a tour of countries in the region, kicking off with Djibouti over the weekend, to stress the importance of delivering aid within the country first, so Somalis do not have to trek elsewhere.

"We don't want our compatriots to have to make testing journeys to other countries to receive aid," he told Reuters.

The African Union is also planning to hold a pledging conference for African heads of state and international partners on Aug. 9 in the Ethiopian capital to raise money to support those hit by the drought in the Horn of Africa.

"Around the globe, everyone must dig deep into their pockets to rescue the people of Somalia from the abyss they find themselves staring into," said AU Commission Deputy Chairperson Erastus Mwencha during a visit to Mogadishu last week.

As night fell over the crowded refugee camp, a young girl led her family out of the scrub, carrying a rug adorned with scriptures from the Koran over her shoulder.

They were the latest among the tens of thousands of refugees arriving at the already over-flowing camp, initially meant to host 270,000 people but now home to more than 400,000, the vast majority Somalis.

Aid workers are struggling to cope with the influx. It is taking the United Nations refugee agency days, sometimes weeks to register and issue new-arrivals with tents.

Weary from the long walk to Kenya, the girl's family will have to mark at least the start of Ramadan sleeping rough in the bush.

Close by, just before the start of the fast, Abdulrahman Malim Abdi mopped up the remains of a meal of wheat flour and water -- scant sustenance for him and his 10 children.

Abdi said his family's two-week food rations were unlikely to last that long, even if they adhered to the strict rules of the fast.

"This is how we enter Ramadan, it will be difficult," Abdi said, adding that in previous years he would have broken a day's fasting with meat, rice, pasta and dates.

"We'll worship here, right by the tents. In our situation, you can't even dream of a mosque," he said.