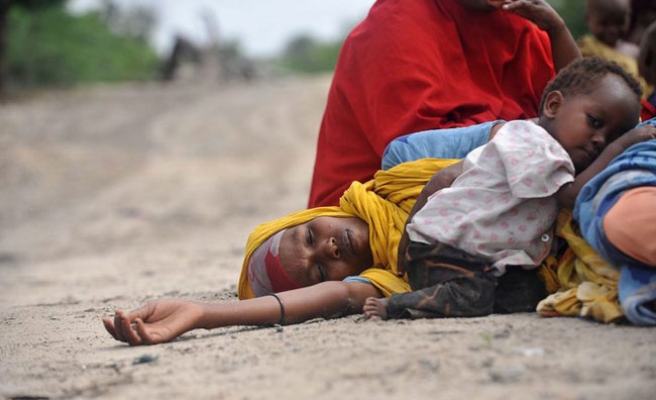 The famine gripping parts of southern Somalia has spread to three new areas of the country, with the entire south likely to be declared a famine zone within the next six weeks, the United Nations said Wednesday.

Acute malnutrition and death rates surpassed famine thresholds in the Balcad and Cadale districts of Middle Shabelle, and among the refugee populations in Mogadishu and the Afgoye corridor, said a statement from the U.N. Food and Agriculture Organization's Somalia food security unit.

"(The) current humanitarian response remains inadequate, due in part to ongoing access restrictions and difficulties in scaling up emergency assistance programs, as well as funding gaps," said the statement.

Famine conditions were expected to persist across southern Somalia until the end of the year, the statement said.

Caught between famine and conflict

Each day hundreds of drought-hit Somalis are streaming into squalid camps in and around Mogadishu, defying rebel orders to stay put and walking into a war zone.

The start of the Muslim holy month of Ramadan two days ago coincided with a new offensive by African peacekeepers and government forces against the insurgents and a jump in rebel suicide attack threats.

The violence has compromised the delivery of emergency aid to some 100,000 refugees who have arrived in Mogadishu in the last two months, bringing the total to around 400,000.

"Local doctors came to us this morning and said two of my children are malnourished and anemic. We were given a few days worth of food but we have no shelter, not even plastic sheets," said mother-of-seven Hawa Omar within sight of the airport.

Omar spoke to Reuters in a makeshift settlement now home to an estimated 4,000 newly arrived refugees, about 10 km (6 miles) from the front lines where government forces engage the rebels in daily gun battles.

She was among several camp dwellers who said they had not received any help from international agencies, only residents.

The U.N. refugee agency, UNHCR, said it was able to distribute relief through local networks but its work assessing the needs of new arrivals had been slowed.

"The plan was to start the assessments in about 10 other settlements in the coming days but all the movement's been restricted since the offensive started," Andy Needham, spokesman for UNHCR Somalia, told Reuters in Nairobi.

Drought, conflict and a lack of food aid have left 3.6 million people at risk of starvation in southern Somalia. The drought, the worst in decades, has affected about 12 million people across the Horn of Africa.

"Certain organizations will be more relaxed. It should enable humanitarian aid to get closer to those who need it most," said WFP spokesman David Orr, whose organization was forced to suspend operations in southern Somalia in early 2010.

Orr said that WFP, which still cannot operate in southern Somalia, remained concerned food aid could end up in rebel hands if its distribution was not properly monitored.