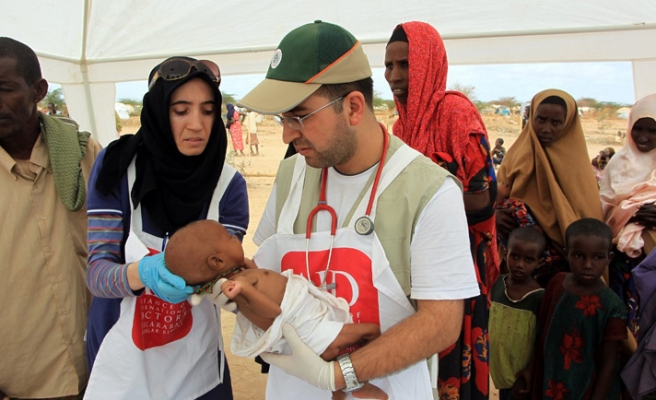 Muslim refugees, who came from drought-hit Somalia and settled into Dadaab Refugee Camp in Kenya, ask Turkey and other Muslim countries to construct hospital, school and mosque in the camps they are living.

The Muslim refugees in Dadaab said the assistance and investments made by the UN to the camps were insufficient, and noted that UN member Muslim countries, including Turkey, should research the outcome of the aid that have provided. They also want Turkey and other Muslim countries to send representatives if necessary to take part in distribution of the assistance.

The Somali refugees said the assistance made by Turkey elated them, noting, "our children study under burning sun in shanty wooden huts. Current mosques in Dadaab are not adequate. A few new mosques may solve the problem."

Construction of a vocational high school by the UN is underway in the region.

Most of those people waiting for treatment suffer cataract, a curable eye disease. Dust and the unsanitary living conditions are the main cause of this disease.

A.A correspondent interviewed with an ophthalmologist who said he treated 20 patients within a few hours, noting hundreds of others were waiting outside for treatment.

Murat Kavakdan, deputy chairman of the Turkish charity organization IHH Humanitarian Aid Foundation, told the A.A correspondent that there were few schools and hospitals in Kenya, Somalia, Ethiopia, Djibouti and Uganda, "people living in this region, particularly in Somalia, need support of Turkey and Muslim countries. We think Turkey should open educational institutions in the region. We have witnessed that Somali Muslims give high importance to their children. Children are trying to learn the Koran and the alphabet which they wrote on the wood. There will be very positive developments if Turkey opens educational institutions in the region," he said.

Kavakdan said the UN has three hospitals in camps in the region, "the hospitals were planned for 90,000 refugees. There are more than 500,000 people in the camps today. Number of refugees approached 600,000. Doctors working in the hospitals of the UN went on a strike because of the high number of patients. This region urgently needs hospital. We have invited Turkish journalists to the region on purpose. They have seen the difficulties and urgent educational and health needs on the spot," he said.

Palakoglu said that their teams were distributing assistance to 500 families everyday.

Tens of thousands of people are suffering from drought and famine in Somalia and head for refugee camps in Kenya and Ethiopia in search of food and water. Turkey, on Wednesday, hosted an extraordinary meeting of the Organization of the Islamic Cooperation (OIC) in Istanbul to discuss the recent situation in Somalia, the reasons of hunger crisis and what can be done for Somali people.