In Banaadir town of Mogadishu, thousands of Somali women condemned the attack on the staff building of Turkish Embassy. 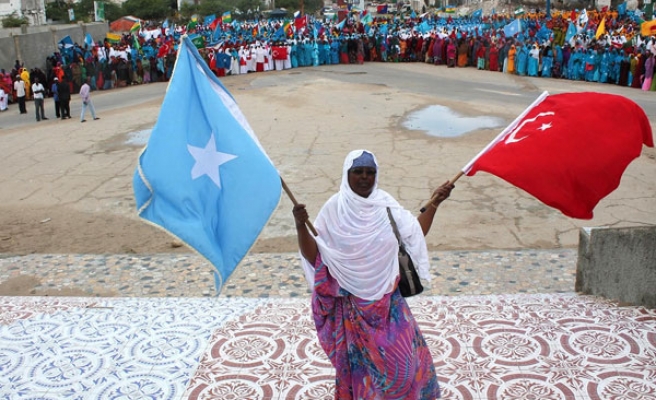 Somali women held a sympathy rally for Turkey on Thursday in protest of the recent attack on Turkish Embassy in Mogadishu.

Attending the rally in Banaadir town of Somali capital of Mogadishu, thousands of Somali women condemned the attack on the staff building of Turkish Embassy

Ayse Mahmoud, one of the demonstrators, said "The attack came unexpectedly. We are very sorry for what happened. Turkey does not deserve such a heinous attack."

Besides, Mogadishu Mayor Mohamed Nour, holding a press conference, condemned the attack, too.

"Turkish people supported the Somali people on their hardest days, by sending aid. Turkish Premier Recep Tayyip Erdogan visited us while everyone staying away of the country. The aid came from Turkey just when we needed food and medical aid most. The precautions have been taken to prevent another attack," he said.

One Turkish security guard was killed and four others were injured on July 27 while two suicide bombers were killed as another suicide bomber blew himself up in front of staff building of Turkey's Embassy in Somali capital Mogadishu. They were brought to Turkey on an ambulance aircraft of Turkish Health Ministry and held under medical care in Ankara's Ataturk Training and Research Hospital.