'The passengers were intended for another airline, Turkish Airlines,' Daallo Airlines CEO says 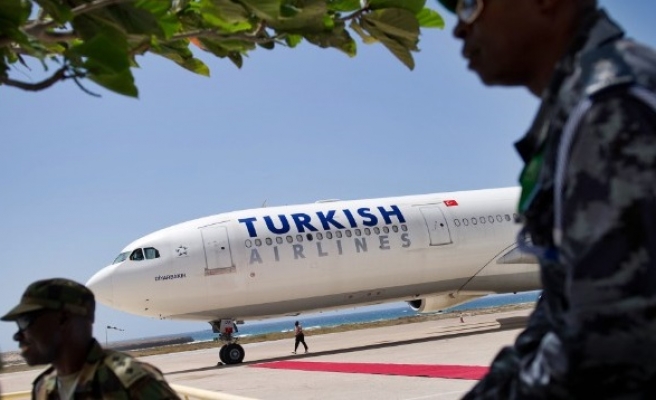 A man suspected of detonating a bomb on a Somali passenger plane had initially intended to board a Turkish Airlines flight, the company's chief said Monday.

The February 2 blast ripped a hole in the fuselage of the Daallo Airlines plane shortly after it took off from Somalia's main airport, killing the suspected bomber and forcing an emergency landing.

But the Turkish plane did not turn up and Daallo Airlines agreed to fly the passengers onwards to Djibouti.

Somali intelligence officials on Sunday released surveillance footage appearing to show a passenger being given a laptop in which the bomb was concealed.

At least 15 people have been arrested.

A passenger believed to be the bomber, identified as Abdulahi Abdisalam, was killed, probably after being propelled out of the aircraft in the explosion, investigators said.

Two of the 74 passengers were slightly injured.

The blast punched a one-metre (three-foot) hole in the side of the Airbus A321 about 15 minutes after it had taken off from Somalia's capital Mogadishu.

"The investigation is in the hands of the authorities inSomalia," said Olad, speaking by telephone from the United Arab Emirates (UAE).

Daallo Airlines operates flights across Somalia and the wider Horn of Africa and Gulf region.

Mogadishu airport is heavily fortified and adjoins the capital's main base of the African Union mission toSomalia, the 22,000-strong force backing the government in the battle against armed group Shebab insurgents.

While the Shebab has been East Africa's longtime Al-Qaeda-affiliate, some factions last year reportedly split to pledge their allegiance to the ISIL group.

They have made no claim of carrying out a bomb attack on the plane.

Turkey has blamed ISIL militants for a string of suicide bombings in major cities. In January, 10 German tourists were killed in an attack in Istanbul, while more than 100 lost their lives in October in the capital Ankara in the deadliest attack in Turkey's modern .

Turkey is also a major donor to and investor inSomalia and their relations date back centuries.

Since famine devastated parts of the Horn of Africa nation in 2011, Turkish President Recep Tayyip Erdogan has forged close ties with Mogadishu and launched a raft of construction and development projects.

Turkish Airlines is one of the only major international airlines to fly regularly to Mogadishu.