Somalia President looking forward to meeting with Turkish President as he expresses gratitude to Turkey's support to develop his country. 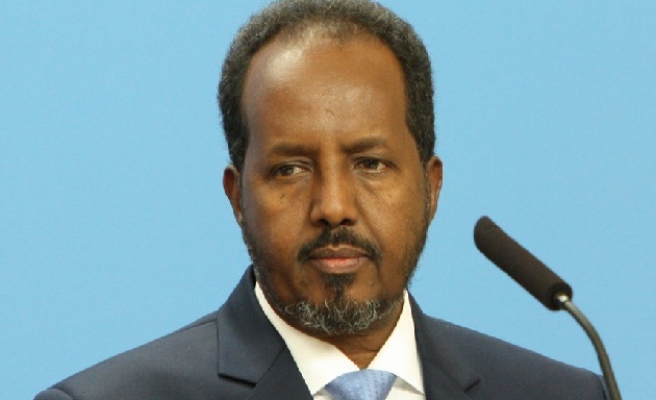 World Bulletin / News Desk
Somali President Hassan Sheikh Mohamud has hailed what he described as "strong and unwavering commitment" shown by Turkey to developing his embattled country which has been gripped by violence for decades, asserting that he looks forward to meeting with Turkish President  Recep Tayyip Erdogan on Friday in Mogadishu.

"Turkey showed remarkable support to Somalia during a time when the world seemed to have forgotten about us," Mohamud told The Anadolu Agency in an interview by e-mail.

"The friendship and support Turkey has shown is something that will be forever cherished by every Somali, all over the world," he added.

Erdogan is expected to arrive in Mogadishu from Ethiopia on Friday, according to Somali presidential spokesman Daud Aweis. He is scheduled to hold talks with his Somali counterpart along with other top government officials.

"The agenda for bilateral talks will focus on ongoing economic, military, social, infrastructure partnership and humanitarian aid initiatives that Turkey is supporting in Somalia," Mohamud said, noting that he is "very pleased" to meet with the Turkish leader.

"Turkey is renowned for ‘getting things done’, and this visit will involve visits to various completed projects, including the opening of the Somalia-Turkey Education and Research Hospital and the new international Aden Adde Airport," the Somali leader said.

The Friday visit is the second to Somalia by the Turkish leader in four years. He first visited the country in 2011 as prime minister at the height of the Somali famine.

Turkey has since been the most visible foreign country to help war-torn Somalia rebuild its crumbling infrastructure, a stance that has been highly valued by Mohamud.

"Turkey was one of few countries that – despite significant risk- began to invest in and support Somalia-led development efforts very early after the formation of the Federal Government of Somalia," Mohamud told AA.

"Turkey has led the international community by setting the example of developing a holistic, on-the-ground partnership with Somalia; supporting Somalia in developing according to a nationally-led and owned agenda.

Turkey also has launched various development and infrastructure projects in Somalia, ranging from health and sanitation projects to the construction of roads and buildings, he added.

He also cited the rehabilitation and management of Aden Adde International Airport and the management of the Mogadishu Port. "Places of worship have also been restored, and many Somalis are currently being educated in Turkey," he added.

Only hours ahead of Erdogan's visit, security has been beefed up across the city, with authorities banning the movement of transport vehicles in some streets while special combat forces have been deployed citywide.

A suicide bomber nevertheless managed to blow up his explosive-packed car near the presidential palace, killing himself and three others.

After the attack, Turkish Prime Minister Ahmet Davutoglu asserted that Erdogan was still intending to visit Somalia despite the attack, which was claimed by the Al-Shabaab militant group.

Nevertheless, Mohamud believes that Al-Shabaab is "on the back foot" and assured Turkish investors interested in investing in Somalia that the situation is getting better.

"Together the Somali National Army (SNA) and the forces of the African Union Mission to Somalia (AMISOM) have returned 80% of population centers to the control of the Federal Government," he said.

Yet, he warned that Al-Shabaab still exists as an "ideological force" and still stands behind "limited attempts to conduct counter-terrorist attacks, most of which are apprehended before leading to any damage."

"This is Al-Shabaab’s last ditch attempt to prove their dwindling strength," he said.

"[But] with risk comes opportunity and reward. Both the Turkish Government and Turkish private sector have shown an admirable appetite for seizing the opportunities offered by not shying away from risk," he added.

In a message to the Turkish people, Mohamud voiced hope that the Turkish support would continue unabated.

"We appreciate the continuous support of Turkey in helping Somalia achieve long lasting peace and prosperity," he said.

"We have made significant progress together, but we still have a long way to go, and we cannot do it alone."