Hundreds of Somalis fled from Mogadishu on Thursday as fighting between Islamist insurgents and government troops entered a fourth day with both sides claiming advances. 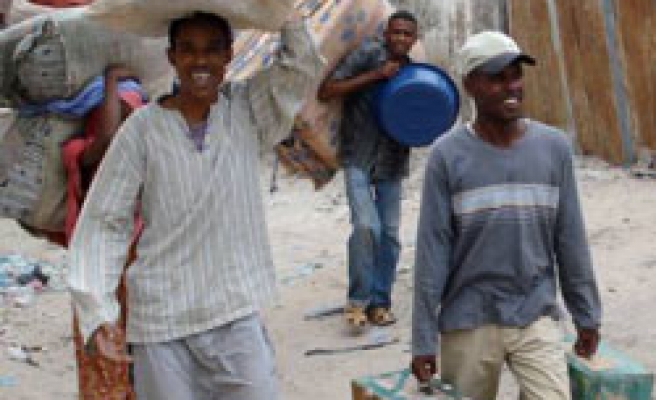 Hundreds of Somalis fled from Mogadishu on Thursday as fighting between Islamist insurgents and government troops entered a fourth day with both sides claiming advances.

Residents fled the carnage, some with their belongings piled high in wheelbarrows, others clutching their children, as al Shabaab fighters fought street by street against Africa Union-backed Somali forces.

The militants said they were behind a shooting rampage in a hotel on Tuesday that killed at least 33 people including members of parliament.

"Mujahideen fighters made new bases (in) the areas they captured from Uganda, Burundi and stooges including Dabka junction, Whelie hotel and 15 May school which is very close to the palace," al Shabaab said on the al.kataib website.

More than 6,300 peacekeeping troops from Uganda and Burundi are in Mogadishu to prop up the U.N.-backed government.

A police spokesman denied al Shabaab claims that government troops were losing territory in a city where the interim administration is already hemmed into just a few blocks, with insurgents controlling the rest.

Mother of three Amina Mohamud said their home in Mogadishu's Howlwadag neighbourhood had been surrounded by gunfire on all sides for days.

"We were unable to come out the house. We couldn't get food and even the piped water was cut off," she said, carrying her daughter.

"All traders and dealers have stopped venturing into the bazaars and lorries from the port can't transport shipments to market as the fighting has affected the only route we could use," said Ali Mohamed Siyad, chairman of the Bakara market traders' committee.

"Likewise, merchants from the regions can't come to market while the constant shelling continues so this could prompt inflation and food shortages across parts of southern Somalia."