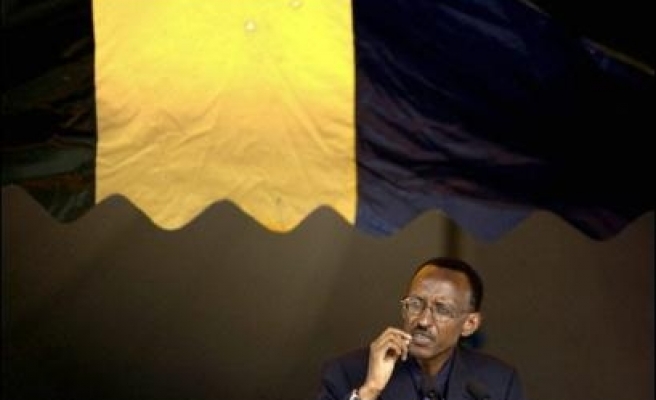 A South African court on Friday found four men guilty of trying to kill an exiled critic of Rwandan President Paul Kagame, in a case that had strained diplomatic ties between the two countries.

Former Rwandan army chief General Faustin Kayumba Nyamwasa survived being shot in the stomach as he was being driven into his Johannesburg home in 2010, the same year he fled Rwanda after falling out with former ally Kagame.

Another attempt on Nyamwasa's life in March this year intensified diplomatic tensions as South African Justice Minister Jeff Radebe warned Rwanda that "our country will not be used as a springboard to do illegal activities".

Rwanda's ambassador in Pretoria responded by denying Kigali was involved in attacks against exiles and the countries traded tit-for-tat expulsions of diplomats.

South African Magistrate Stanley Mkhari said four men - two Rwandan and two Tanzanians - were guilty of the first count to commit murder four years ago. He also found them guilty of joint possession of a firearm and ammunition.

Sentencing was expected next month.

Mkhari said there was not enough evidence to link two other accused - Nyamwasa's driver Richard Bachisa and Rwandan businessman Pascal Kanyandekwe - to the crimes.

Prosecutors had accused Kanyandekwe of being a key organiser of the attempted killing and of working with Bachisa, who had been driving Nyamwasa and his wife home when a gunman accosted them at the security gate.

Rwandan political exiles sheltering in other countries in Africa, Europe and the United States have pointed an accusing finger at Kigali for dozens of attacks on Kagame's critics on foreign soil, charges Rwandan leaders have dismissed.

Kagame, who has won Western praise for rebuilding Rwanda after the 1994 genocide, denies his government ordered the attacks, but has said "traitors" should expect consequences, a remark that dismayed Western donors of the Great Lakes state.

Critics say Kagame, who led his predominantly Tutsi rebel movement to power after the genocide and won support from Western powers as an ally in turbulent central Africa, has taken advantage of Western guilt over the genocide to increase persecution of opponents.

The United States has expressed concern at what it calls "politically motivated murders of prominent Rwandan exiles".

South Africa has refused to extradite Nyamwasa despite a request by French authorities who say he is one of the officers who knew of Kagame's alleged order to shoot down a plane carrying the then presidents of Rwanda and Burundi, which triggered the 1994 genocide.

Spain has also sought Nyamwasa's extradition for war crimes and crimes against humanity in respect to the murder of Spanish citizens in Rwanda and the massacre of thousands of Hutu refugees at a football stadium.