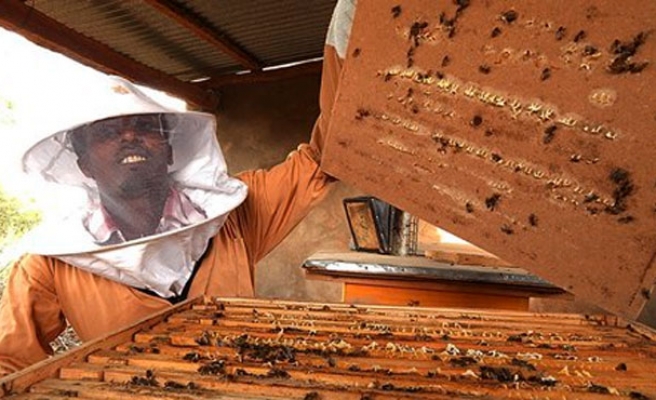 A harvest of honey from the equatorial forests of South Sudan will help its struggling poor and, through the pollination of bees, improve the nation's crop yields, those involved say.

Spring production over the coming weeks is expected to deliver 60 tonnes, double the volume of an initial batch of exports last year to Kenya.

South Sudan's honey harvests had suffered because decades of fighting closed off the former main trade route through the north.

"Honey production is not a panacea. We're not trying to save the country or eliminate the conflict, but we do want to do our part," Madison Ayer, head of development charity Honey Care Africa, told Reuters.

Honey Care Africa has been working since 2013 in South Sudan, where it sees potential to collect honey from bees immune to the problems that have depleted colonies in the United States and to a lesser extent in Europe.

The charity has worked in Kenya for a decade, but droughts can be a problem for honey-making there so it sought to expand. It looked at Tanzania, but decided South Sudan had greater untapped potential.

Zambia too has developed production sufficiently to allow international export and internet sales of honey from wild bees that live in rain forests.

"There is high potential indeed. When I get reports of honey exports from countries like Zambia of 300 metric tonnes and then I look at our forests here, I feel we have much more potential," Jabob Moga, a bee expert in South Sudan's agriculture ministry, told Reuters by telephone.

"With a little understanding, it's a good source of income... It's a win-win kind of activity."

Honey Care Africa has invested $1 million in South Sudan and local farmers have received income of more than $75,000, benefiting more than 400 families.

While Sudan's oil wealth helped to fuel the conflict, corruption and rivalry that led South Sudan to be split off from Sudan, reviving honey production can aid recovery among the poorest in one of the world's least developed countries.

"When I get the money from the honey, I pay the school fees of my children. I buy other things like sugar, tomatoes, onions. I keep some money with me for emergencies in case my children get sick," Lilian Sadia James, one of the South Sudanese beekeepers working with Honey Care, said.

Relations between Sudan and South Sudan, which gained independence in 2011, remain fraught, leaving little hope of re-establishing the south-north route.

Honey Care Africa therefore is exporting to Kenya with a view to eventually shipping more widely.

At the United Nations' Food and Agricultural Organization Barbara Gemmill-Herren of the International Pollinator Initiative said "building markets with Kenya makes a lot of sense" for South Sudan. But she also cautioned that previous projections of "rivers of honey" had disappointed.