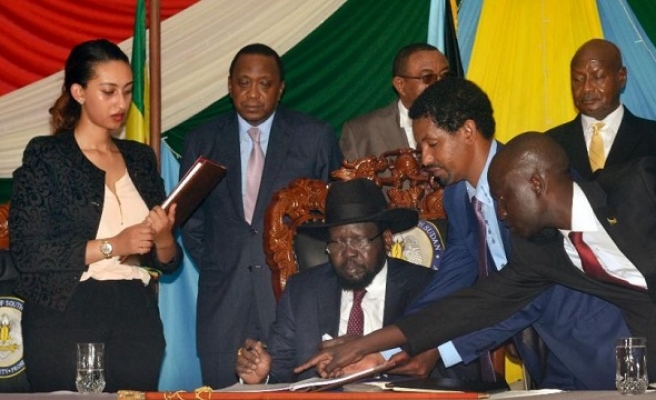 A deal signed by South Sudan's president aimed at ending 20 months of civil war was given a cautious welcome Thursday, with both sides in the conflict urged to show good faith.

At least seven ceasefires have already been agreed and then shattered within days or even hours since war began in December 2013.

African Union Commission chief Nkosazana Dlamini-Zuma said Thursday the deal was "a critical step in the efforts aimed at ending the conflict" but said the agreement must be implemented.

"Seize this unique opportunity to open a new chapter," she said, calling on all sides to "scrupulously abide by its terms and faithfully implement its provisions."

Serious concerns remain. President Salva Kiir signed the peace accord on Wednesday at a ceremony in Juba, but he annexed a list of reservations that would have to be addressed for the agreement to take hold.

Both sides traded blame Wednesday for attacking each other. Under the deal, a permanent ceasefire must come into force by nightfall on Saturday.

The UN Security Council has given Kiir until September 1 to get fully behind the agreement or face possible sanctions, and the United States has circulated a draft resolution that would impose an arms embargo and targeted sanctions on those who undermine peace efforts.

Key aid agencies, that are struggling to stem a humanitarian crisis in the devastated nation, said in a joint statement that even if implemented the deal was "only the beginning of a long, hard journey towards peace and reconciliation."

Tens of thousands of people are thought to have died in a war marked by ethnic killings, gangs rapes and child soldier recruitment.

"The value of the peace deal will only be seen on how it is implemented on the ground," the International Rescue Committee (IRC) said.

"The people of South Sudan need more than words," said John Hoare from CARE aid agency. "They need real commitment from their leaders to ensure that this is a lasting peace, that the violence has ended and the reconciliation process can begin."

The deal was brokered by the regional eight-nation IGAD bloc, along with the UN, the African Union, China, Britain, Norway and the United States.

The conflict has been characterised by ethnic massacres and rape.

"Much more needs to be done to ensure lasting peace and stability," said Oxfam chief in South Sudan Zlatko Gegic.

"With millions of people hungry, it is crucial that all warring parties respect the agreement, stop fighting immediately and allow life-saving aid to reach people where they are."

Before signing, Kiir himself warned of the risk of failure, saying there were "so many things we have to reject" in the deal, and that "such reservations, if ignored, would not be in the interests of just and lasting peace."

He also called on regional leaders at the signing ceremony -- including Ethiopia, Kenya, and Uganda -- to support the deal.

"Stand with us in the implementation," he said. "Otherwise we may spoil it, if it is left to us."