Ban said he was told by Machar that his remote location could prevent him reaching Addis Ababa by May 9, when he and South Sudanese President Salva Kiir had been asked to arrive 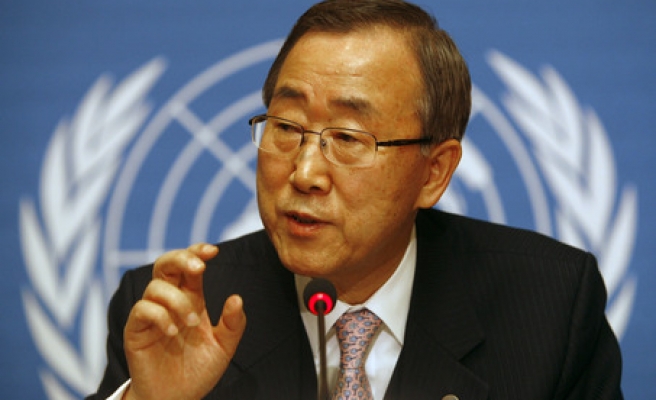 U.N. Secretary-General Ban Ki-moon said on Tuesday South Sudan's rebel leader Riek Machar had been invited to Ethiopia for peace talks and would "try his best" to go by the end of the week.

Ban, the second world leader to visit Juba in less than a week to mediate between the warring sides, said he was told by Machar that his remote location could prevent him reaching Addis Ababa by May 9, when he and South Sudanese President Salva Kiir had been asked to arrive.

"I expect the prime minister (of Ethiopia, Hailemariam Desalegn) will facilitate dialogue between the two leaders," Ban told a news conference in Juba, after saying Kiir had confirmed his readiness to meet Machar.

An advisor to Desalegn also said Machar had given his word to the prime minister that he would attend.

"He is 100 percent willing to come to Addis to discuss issues of peace, including talks with President Salva Kiir," Getachew Reda told Reuters.

The visit by Ban, who met Kiir in the South Sudanese capital and spoke to Machar by phone, is part of a mounting international push to stop the increasing ethnic violence that Washington and regional powers fear could descend into genocide.

"The only viable option is to resolve this issue through dialogue. There is no military solution," Ban said.

U.S. Secretary of State John Kerry, who was in Juba on Friday, secured a commitment by Kiir to meet his rival but failed to win a similar commitment from Machar. Kerry later threatened Machar with sanctions if he did not take part.

U.S. and other diplomatic sources told Reuters on Monday Washington would back up the diplomacy with sanctions on figures from both sides of the conflict in coming days.

"When it comes to sanctions, that will be decided by the Security Council," the U.N. chief said when asked about possible punitive measures.

A South Sudanese official said there was no need for sanctions on the government side, as the president had responded to international pressure and agreed to meet Machar.

Thousands of civilians have been killed and more than a million have fled their homes since fighting started in mid-December between troops loyal to Kiir, an ethnic Dinka, and fighters backing his sacked deputy Machar, a Nuer.

Government and rebel negotiators in Ethiopia agreed on Monday to consider a "month of tranquillity", but rebels and the army continued to battle for control of the northern oil town of Bentiu. Aid workers reported no fighting there on Tuesday.

Both sides claimed control of the town, capital of oil producing Unity state and scene of an ethnic massacre last month that fuelled fears of a genocide.