"I'm not a Brotherhood member, and I didn't flash the Rabaa sign for their cause," Habiba asserted. "But I'm opposed to the excessive injustice currently going on in the country." 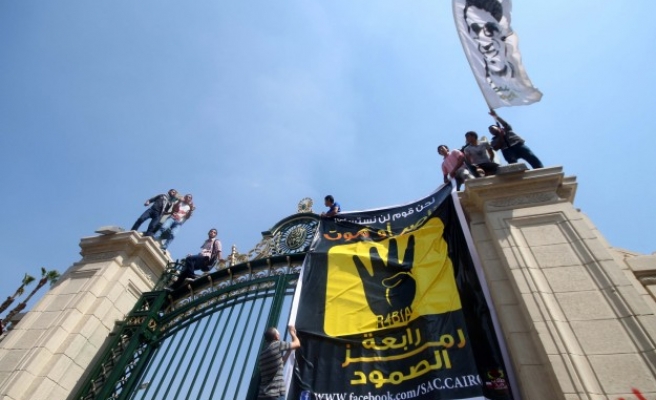 An Egyptian secondary school student raised eyebrows during her school's morning assembly on Wednesday when she flashed the 'Rabaa' sign – the four-fingered salute associated with the Rabaa al-Adawiya protest camp – during a visit by Education Minister Mahmoud Abul-Nasr.

Habiba Mohamed made the sign as Abul-Nasr, accompanied by several senior ministry officials, was attending the morning assembly at the Mutufawekat Secondary School in Cairo's Maadi district, an Anadolu Agency correspondent reported from the scene.

Abul-Nasr's visit came as part of a general inspection of several schools for the first week of Egypt's new academic year.

Surprised by the student's bold move, the minister later asked to meet with Habiba in the presence of the school board and media representatives.

"I was angered when I saw Egyptian TV filming us wearing badges of the Egyptian flag, which is part of the media's deception campaign," the student told the minister. "Patriotism isn't about wearing flags."

"I'm not a Brotherhood member, and I didn't flash the Rabaa sign for their cause," Habiba asserted. "But I'm opposed to the excessive injustice currently going on in the country."

"I refuse to take part in the media's campaign of deception," she added.

"We're trapped in this school while our brothers are being killed outside," she went on. "And when we want to tell the truth, you want us to fear the consequences – but I'm not afraid to express my opinion."

Nor was the minister – who arrived to the school late, delaying the morning assembly – spared the young student's criticisms.

"Students had to wait for one hour under the sun simply to be filmed with you," she told Abul-Nasr, who attempted to justify his tardiness by saying that he had been stuck in traffic.

The minister went on to tell Habiba that politics should be kept out of the classroom.

"Mixing education with politics is unacceptable," he told her. "Outside school, you can do whatever you want."

Following the standoff, the minister affirmed that Habiba would be penalized for "dragging politics into the education process."