Al-Mahdi was welcomed by dozens of cheering supporters before being driven to his home in Omdurman, west of the capital. 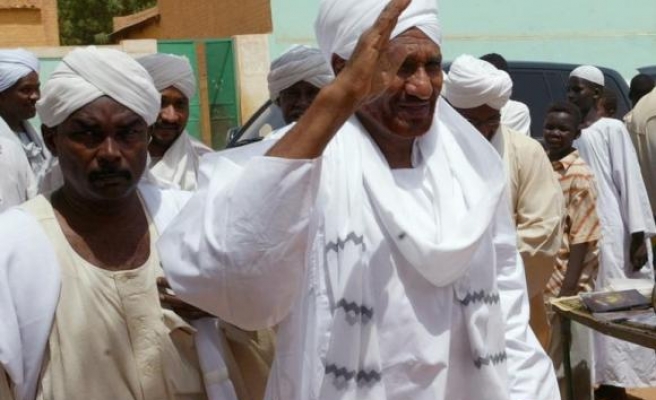 Sudanese authorities on Sunday released opposition leader Sadeq al-Mahdi after he was pardoned by President Omar al-Bashir following almost one month in detention on charges of defaming the country's security agencies.

An Anadolu Agency correspondent said that al-Mahdi, the leader of the Umma Party, had left Coper Prison in capital Khartoum.

Al-Mahdi was welcomed by dozens of cheering supporters before being driven to his home in Omdurman, west of the capital.

A mediation committee announced earlier Sunday that al-Bashir had agreed to pardon al-Mahdi.

The opposition leader was arrested in mid-May on charges of defaming the country's security and intelligence apparatuses after he allegedly blamed them for a surge in violence in the troubled Darfur region.

Committee member Kamel Idriss, a former presidential candidate, told a press conference Sunday that the pardon came following a series of meetings with government officials and al-Bashir himself.

Tensions had appeared to ease between opposition forces and al-Bashir – who overthrew al-Mahdi's elected government in 1989 – after the president had invited the opposition to take part in national dialogue.

Before his arrest, Al-Mahdi, Sudan's prime minister between 1966 and 1967 and again between 1986 and 1989, had agreed to join the national dialogue before his party walked out in protest of his arrest.

Idriss, meanwhile, urged President al-Bashir to order the release of all political detainees, including Ibrahim al-Sheikh, leader of the opposition Sudanese Congress Party.

Al-Sheikh was arrested last week in the town of En Nahud in West Kordofan State.

He currently faces multiple charges, including incitement to violence and undermining the constitutional regime – both of which are punishable by death.

"The committee would continue its god offices until all political detainees are released and national accord is realized," Idriss said.

Sudan has been plagued by internal differences, fights between the army and rebel movements, especially in the southern and western parts of the country, and a deteriorating economy.

What initially seemed to be a popular uprising against long-serving al-Bashir in some of the country's states last year was immediately and brutally quashed by authorities.

In early April, the Sudanese president gathered the opposition in Khartoum and pledged broader freedoms for political forces.

He also promised the release of all political detainees who had not been convicted of criminal offences.