The neighbours had agreed on how much landlocked South Sudan should pay to export its oil through Sudan, African Union mediator Thabo Mbeki said 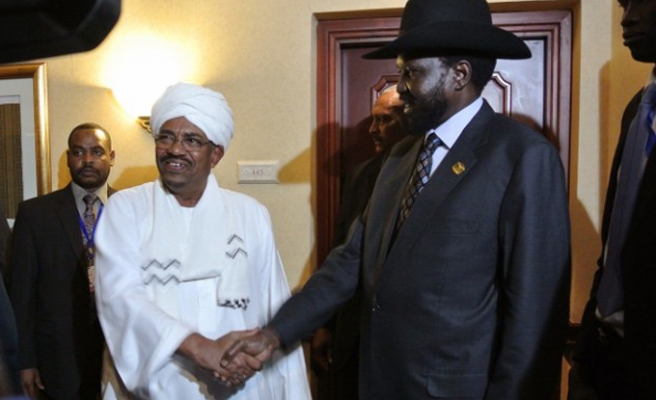 Sudan and South Sudan have reached a deal on oil payments and will soon discuss when to resume southern oil exports through the north, a mediator from the African Union said on Saturday.

Landlocked South Sudan shut down its entire oil production in January after failing to agree with Sudan on how much it should pay to export oil through northern pipelines. Oil is the lifeline of both economies.

The rivals came to the brink of a full-scale war in April after border fighting escalated, the worst violence since South Sudan became independent in July last year under a 2005 agreement that ended decades of civil war with Khartoum.

The duo's messy divorce failed to mark the border and how much landlocked South Sudan should pay to export its oil through the north.

"It's an (oil) agreement about all of the matters. The issues that were outstanding were charges for transportation, for processing, transit," former South African President and AU mediator Thabo Mbeki told reporters.

Sudan confirmed it had reached an oil agreement with South Sudan but said it would be implemented only after a new round of talks on security issues, state news agency SUNA said on Saturday.

"The agreement does not fulfil the ambitions of both sides," spokesman for the Sudanese delegation Mutrif Siddig told SUNA. "Its implementation will start after understandings on security issues."

The news came as a surprise after the South's top negotiator Pagan Amum had accused Sudan of demanding too high a transit fee. Both delegations had hours earlier broken off talks without a comprehensive deal after a U.N. Security Council deadline expired.

It was not clear how an oil deal would work as Sudan has said it would not agree on oil payments before settling border security issues, the biggest obstacle between the neighbours.

Both sides had improved their oil payment offers in the past few days.

South Sudan said last week it was willing to pay $9.10 and $7.26 per barrel to export oil through two pipelines crossing Sudan, alongside a $3.2 billion package to compensate for the loss of most oil reserves to the South. It had previously offered $2.6 billion.

Sudan itself lowered its demand to $15 a barrel per pipeline, down from $32, according to officials. It had until last week insisted on $36 a barrel.

"What will remain (now)...is to then discuss the steps as to when the oil companies should be asked to prepare for the resumption of production and export," Mbeki said of the deal.

African Union-mediated talks, led by Mbeki, have long been hampered by differences on where to draw up a demilitarised buffer zone - seen as a first step to ending hostilities.

Amum also reiterated calls on Saturday for an arbitration body to resolve a dispute over the position of their shared border.

Mbeki said talks on their porous frontier were yet to be finalised, while Sudanese President Omar Hassan al-Bashir and his southern counterpart Salva Kiir were scheduled to discuss Abyei next month.

"We have informed them (AU) that there has been an agreement between the parties that the matter of the final status of Abyei will be addressed at the next summit meeting of the presidents (Bashir and Kiir)," he said.

The AU has requested both sides to resolve the remaining disputes by Sept. 22, Mbeki added

On Friday, U.S. Secretary of State Hillary Clinton urged both sides to reach first a deal on oil to end hostilities.