The Taliban claimed responsibility for attacks in the diplomatic quarter of Kabul and the west, and said they had also launched an attack near the airport. 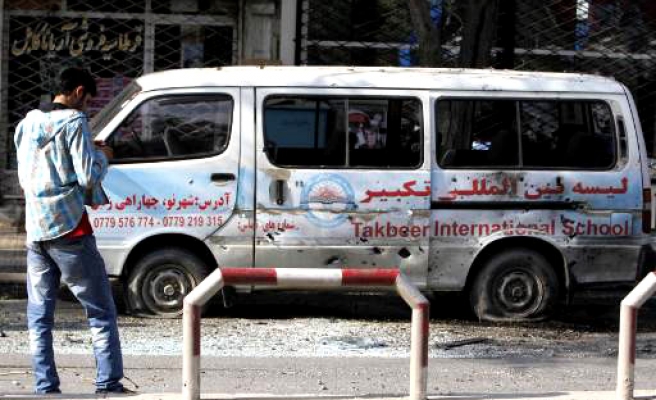 The Taliban claimed responsibility for attacks in the diplomatic quarter of Kabul and the west, and said they had also launched an attack near the airport.

"We have launched attacks on a road near the airport targeting police and two other areas in the west against security forces," said Zabihullah Mujahid, a spokesman for the insurgent group.

Fighters launched a multi-pronged attack in Kabul on Tuesday, firing rockets towards the U.S. and other embassies in central Kabul, and sending two suicide bombers to the city's West later in the afternoon.

The Taliban have launched a high-profile attacks on multiple targets in the capital in the past, but this is the first time they have organised simultaneous assaults on such separate parts of the city.

Near the heavily fortified diplomatic district, insurgents took over a multi-storey building under construction and fired rockets in the direction of several embassy and NATO compounds.

In western Kabul, just a few kilometres away, a suicide bomber detonated his explosives at the entrance to a police building killing a policeman.

A second suicide bomber wounded two people when he detonated his explosives near the Habibia high school, also in the west of Kabul, the Ministry of the Interior said in a statement.

The U.S. embassy said its personnel were safe following the attack in the diplomatic district of the capital, while British Ambassador Sir William Patey confirmed the nearby U.S. embassy had been a target.

"Aware of attack on US Embassy. All UK Embassy staff accounted for," Patey said on Twitter.

The assault was the second major Taliban attack in the city in less than a month after suicide bombers targeted the British Council headquarters in mid-August, killing nine people.

Loud explosions were interspersed with gunfire through the early afternoon, and at least two rockets landed in the upmarket Wazir Akbar Khan district, home to the U.S., British and many other embassies.

One hit a school bus, but it appeared to have been empty at the time of impact. Four wounded civilians had been taken to hospitals, a deputy health minister said.

Two NATO helicopters circled the building in central Abdul Haq square, which the attackers had taken over.

Taliban spokesman Zabihullah Mujahid said the group was armed with rocket-propelled grenades, suicide bomb vests and AK-47s, and was targeting government buildings, the U.S. embassy and the headquarters of the NATO-led International Security Assistance Force (ISAF).

He also confirmed that the group had sent two suicide attackers to west Kabul, and said they had attacked a military convoy near the airport. The last claim could not be verified.

A U.S. embassy spokeswoman said all staff had taken shelter and there were no casualties.