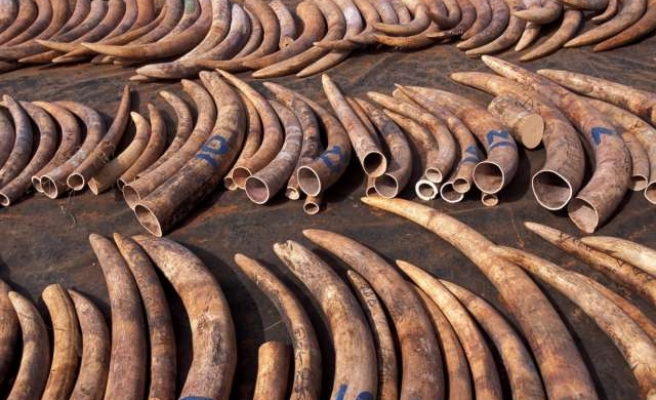 Tanzania is calling for an international ban on trading in ivory products in hopes of protecting its endangered species – including rhinos and elephants – from poachers.

"Without putting an end to international trade in these products, the war against poaching will be futile," Natural Resources and Tourism Minister Lazaro Nyalandu told Anadolu Agency in the northern city of Arusha, which is surrounded by some of Africa's most celebrated nature preserves.

"About 10,000 elephants are killed every year by poachers in Tanzania, which currently has less than 70,000 jumbos [large elephants]," he said.

"Presently, Tanzania is estimated to have only 123 rhinos remaining from more than 10,000 in the 1970s," Nyalandu lamented.

Tanzania was a key range state for the animals by 1980, boasting 3,795 rhinos – accounting for nearly a quarter of Africa's black rhinos at the time, the numbers of which fell drastically from 65,000 in 1970.

By 1995, Tanzania had as few as 32 rhinos remaining, due largely to poaching activity.

Nyalandu estimates that, in Africa, nearly 35,000 elephants – one every 15 minutes – and more than 1,000 rhinos – one every nine hours – are killed by poachers each year.

"This is alarming," he said. "Tanzania and other African countries must put international pressure on leading markets for the rhino horns and elephant tusks to stop buying the trophies."

According to the minister, China, Vietnam, Thailand, Japan and the Koreas represent the leading markets for ivory and rhino horns.

"Though not scientifically proven, rhino horns are in high demand – mainly in the Asian market – as a sex stimulant, unlike ivory which is used to make… other items," Wilbad Chambulo, chairman of the Tanzania Association of Tour Operators (TATO), said.

"We must discourage and stop this," he added.

Minister Nyalandu insists that, without an immediate halt of the selling and purchase of elephant tusks and rhino horns, Africa will continue to see the wanton killing of the endangered animals.

"In order to address the crisis, there should be no trade – legal or illegal – on items made from the two trophies," he told AA.

Nyalandu asserted that his government would leave no stone unturned in its fight against poaching.

"We will use all state organs to unmask those responsible for the carnage of our national heritage," he told AA.

"The establishment of a semi-autonomous Tanzania wildlife authority… is one of our strategies," he said.

Nyalandu went on to note that Tanzania planned to collaborate with Mozambique as well as member-states of the East African Community (EAC), a regional trade bloc, to combat the trend.

TATO head Chambulo, for his part, urged the government to award individuals who had made sacrifices – sometimes paying with their own lives – to protect Tanzania's wildlife heritage.

"The government should not only act firmly against greedy people who are behind the wildlife carnage… it's time we also awarded those who voluntarily participate in conservation," he told AA.