The protests, which started as mainly student-driven demonstrations on university campuses and remain small-scale, spread beyond Khartoum. 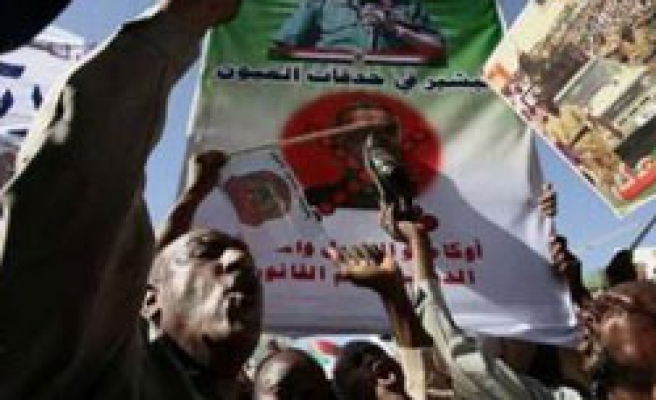 Protests against spending cuts have spread outside the capital in the past two weeks, often accompanied by the chant "The people want the downfall of the regime" - the refrain of last year's Arab Spring demonstrators.

Bashir, in power since 1989 and one of Africa's longest serving leaders, has imposed unpopular austerity measures after losing much-needed oil revenue to newly independent South Sudan.

On Friday police surrounded the Imam Abdel Rahman mosque in the suburb of Omdurman, a centre of support for the opposition Umma Party, and fired teargas at scores of protesters, a Reuters witness said.

The protesters in turn hurled stones at the security forces and several were arrested, the witness said. "Freedom, peace and justice! The revolution is the choice of the people," chanted older white-turbaned men and younger men in T-shirts and jeans, before the security forces stopped the demonstration.

Protesters later blocked off a street in the Wad Nubawi district near the mosque but were dispersed by police. "About 250 of us are surrounded inside the mosque compound and we are still being teargassed," an activist in the compound told Reuters by telephone.

The police could not be reached for comment but officials and police have repeatedly denied using excessive force.

More than 100 people protested outside a mosque in the northern suburb of Bahri, the witness said. Other witnesses said more than 150 protesters had blocked a road in another part of Bahri, chanting "Freedom, Freedom".

Sudan has suffered soaring inflation since South Sudan seceded a year ago, taking with it about three quarters of the country's oil, and activists have been trying to use public frustration to build a movement to topple Bashir's government.

It is unclear whether there will be large demonstrations on Saturday, the 23rd anniversary of Bashir's coming to power. A state-sponsored ceremony is usually held but by late Friday the government had not announced any event.

The agents raided the office shortly after the correspondent arrived with pictures of an anti-government demonstration, it said.

The protests, which started as mainly student-driven demonstrations on university campuses and remain small-scale, also spread beyond Khartoum.

One broke out in North Kordofan province in western Sudan where about 200 protesters chanted "No, no to high prices," and another erupted in Wad Madani, capital of al-Jazira province near Khartoum, according to witnesses.

Large demonstrations have been relatively rare in Sudan, though popular revolts broke out in 1964 and 1985, and security forces move quickly to disperse protests.

Government moves to cut spending to plug a gaping budget deficit, including reducing fuel subsidies, sparked the spate of demonstrations over the past fortnight.

Coverage of protests in local media has been restricted, and Bashir has dismissed the protesters as a handful of agitators whose aims most Sudanese reject.