The last storytellers of Morocco

The ancient art of storytelling is making a comeback in Marrakech, with the younger generation of apprentices making an effort to preserve the culture-defining tradition 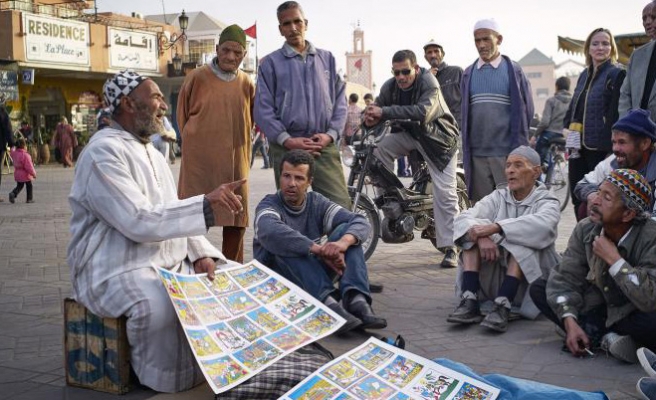 One of the most ancient arts of culture, storytelling, has been an integral part of  Moroccon culture, in particular in Marrakech, for generations. One of the most recognisable symbols of Djemaa el-Fnaa Square, the city’s main thoroughfare, is of animated men performing folk tales; stories about kings, families, lovers and beasts, each one meticulously crafted to educate, entertain and inspire.

However like many places in the the world, the art is a dying one - the number of storytellers present in the city has declined significantly. With new technologies making headway and more lucrative revenue streams, many storytellers have retired from their profession or have found alternative paths for employment. Although not lost, one man has been fighting to keep this distinctive tradition alive in the modern world.

Hajj Ahmed Ezzarghani is a master storyteller who has spent more than 60 years sharing his folk tales as a profession. Now in his seventies, he’s training a new generation – a mix of university students and young professionals – in the skills of the ancient artform.

“As I have grown older, I have realised that storytelling is dying, because the new generations don’t give it as much attention as ours did,” he explains. “But these young Moroccans, they came to me and said they wanted to learn. So we have been working together to preserve this tradition.”

Ezzarghani himself spent time wandering from city to city in the north to quiet towns and villages in the south, sharing his stories with as many people as possible. He spent the last few years of his storytelling career in Djemaa el-Fnaa Square, but retired in 2009 after battling with young performers who would sabotage his performances with staged fights or loud music. “The square has become a place for business instead of art,” he says. “These young acts don’t know the craft [of storytelling].”

Another unique story is that of .Abderrahim El Makkouri. Since he was ten years old, El Makkouri has spent much of his time on Djemaa el Fna square, the exciting, colourful and vibrant centre of magical downtown Marrakesh. He tells his stories to the halqa – the listeners who gather round to hear tales passed down by generations of storytellers, stories that bring together and perpetuate the traditions and the magic of Morocco.

In May 2001, UNESCO honoured this cultural tradition and helped consolidate its preservation when it proclaimed the creative activity on Djemaa el Fna as a "masterpiece of the oral and intangible heritage of humanity". The lack of institutional structures, however, means that such traditional art forms in Morocco, as in many other countries, are in a rather precarious situation.

"Young artists are no longer willing to settle for just a few dirhams," explains Abderrahim El Makkouri. "Like everywhere else, life in Morocco is changing fast. Everything has changed. In my day, we were satisfied with simple meals – what's wrong with lentils anyway?" He laughs. "The young ones nowadays just want to spend all their time loafing around in restaurants. And if this country doesn't come to its senses soon and give active support to storytelling, there will soon be no more Moroccan storytellers on Djemaa el Fna square."

"This is not about storytelling for tourists. Most of them don't speak Arabic in any case."

At the centre of his work to ensure the continuation of Marrakech’s heritage is Hikayat Morocco, a collective founded by Ezzarghani and his apprentices: Mehdi EL Ghaly, Malika Ben Allal, Jawad EL Bied and Sarah Mouhie.

“We as Moroccans grew up on this form of art,” says EL Ghaly. “Nowadays there are fewer storytellers. Their spaces are smaller and they’ve simply disappeared from Djemaa el-Fnaa Square.”

It was the observation of this fading heritage that led to the creation of Hikayat. “We aim to preserve the traditional Moroccan storytelling, as well as giving back to society and encouraging people to pay attention to this ancient form of education,” he says.

Hikayat runs the very popular storytelling events at Café Clock Marrakech every week. **. Michael Richardson, the British expat who owns the café, has been impressed by the diversity of their audiences and the positive public response to their storytelling. “We want to be as open to the local population just as much as we are to any tourist, and I think we’ve achieved that. The audience is varied, and we want to keep it varied,” he says. “We’ve actually had young Moroccans come and visit us who’d never even visited the medina, despite living in Marrakech their whole lives. That’s pretty amazing.”