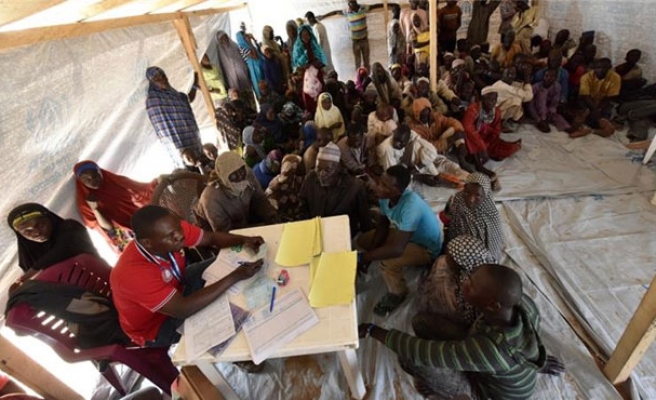 Thousands of civilians fled their homes in the southeastern Niger town of Diffa this week, officials said on Thursday, following waves of cross-border raids and suicide bombings by Nigerian Boko Haram.

Attacks in Niger are deepening a humanitarian crisis in the remote border zone. The area, struggling to feed some 150,000 people who have run to escape violence in northern Nigeria, has seen around 7,000 arrive this week in Zinder, Niger's second biggest town some 450 km (280 miles) west of Diffa.

Niger's military said its forces had killed 260 Boko Haram militants and arrested others in fighting since Feb. 6 but the situation was under control.

The International Rescue Committee, which supplied the population estimates, has teams working around Diffa and Zinder. Matias Meier, country director, said some families in Zinder, one of the poorest regions in Niger, were having to host 20 people, while other displaced were sleeping in the stadium.

A local politician said the flow of people out of Diffa continued on Thursday even though the town was calm.

"Everyone wants to get as far from Boko Haram as possible," the politician said, asking not to be named.

The IRC's Meier said: "Those who went on the trucks are the lucky ones. Bus tickets are sold out until the end of next week. Many are just walking or going by bicycle."

A tout at Diffa's bus station said hundreds of mini-busses, coaches and trucks had ferried people out of the town. The cost of a seat in any vehicle travelling to Zinder had nearly tripled to 15,000 CFA francs ($26), he said.

Boko Haram's insurgency has killed thousands in northeastern Nigeria. Regional armies are mobilising a joint force of 8,700 men to defeat the group that is increasingly threatening neighbouring countries.

Niger's army, backed by Chadian forces deployed to the country, has fought several battles sparked by raids in the Diffa region by militants this week.

"We have taken the steps necessary to guarantee the peace and security of the population. We call on people not to panic," said Colonel Moustapha Michel Ledru, spokesman for Niger's armed forces.

A state of emergency has been declared in Diffa region.

Local authorities in Zinder told France's RFI radio that at least 4,000 displaced had arrived in the town. Schools and administrative buildings there were largely closed on Thursday.

Authorities in Niger have registered over 100,000 Nigerian refugees and Nigeriens who have returned to their home country from Nigeria. However, Meier said violence in recent months meant the number of displaced in Diffa region was closer to 150,000.

The new wave of displacement comes as farmers should be preparing to plant crops for the next harvest, highlighting the long-term impact of the violence.

"People should be planting now but they are on the move," Meier said.