Thousands protest in Sudan against lifting of fuel subsidies 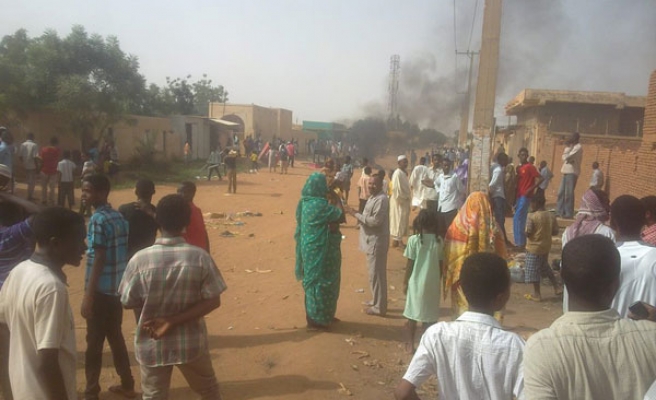 More than 1,000 demonstrators inn Khartoum's twin city Omdurman shouted "no, no to price increases", "freedom, freedom" and "the people want to overthrow the regime". Protesters torched an office of the ruling National Congress Party, blocked several main roads and stoned police officers who were firing tear gas volleys into the crowd, witnesses said.

Veteran President Omar Hassan al-Bashir, in power since 1989, has avoided the sort of "Arab Spring" uprising that has ousted autocrats in Egypt, Libya and Tunisia, but dissent is rising over corruption and a worsening economic crisis.

On Monday, the government almost doubled the price for petrol and cooking gas to try to rein in a ballooning budget deficit. It was the second time in a little over a year that Sudan raised fuel prices that hit the poor hardest.

In Nyala, Sudan's second-largest city located in the western Darfur region, some 2,000 students demonstrated against the government, witnesses told Reuters by phone. Many hurled rocks at police who also fired tear gas.

Protests also broke out in Wad Madani and al-Manaqil in Gezira state south of Khartoum with hundreds of people yelling "no to price increases".

Police said a 23-year-old man was killed during a protest in Wad Madani on Monday but blamed unidentified gunmen opening fire from a passing Toyota pickup car that demonstrators had stoned, state news agency SUNA said.

The Arab African country's economy has been in turmoil since losing three-quarters of its oil reserves - its main source of revenues and of dollars for food imports - when South Sudan became independent in 2011.

The Khartoum government started reducing some fuel subsidies in July 2012, prompting several weeks of modest protests that ended with a security crackdown.

It had hoped to maintain other fuel subsidies by boosting gold exports to replace oil revenues, but was thwarted by the recent fall in global gold prices.

Sudan produces too little to feed its 32 million people. Even basic food imports such as wheat arrive by ship in Port Sudan before they get trucked for days across the vast country, spurring food price inflation.

The government says annual inflation eased to 23.8 percent in July from 37.1 percent in May but independent analysts put the actual rate at 50 percent or even higher.