Thousands rally in support of Ennahda in Tunisia

Shouting, "No to coups, yes to elections," supporters of the ruling Ennahda party crowded into Kasbah Square next to the prime minister's office in the capital, Tunis. 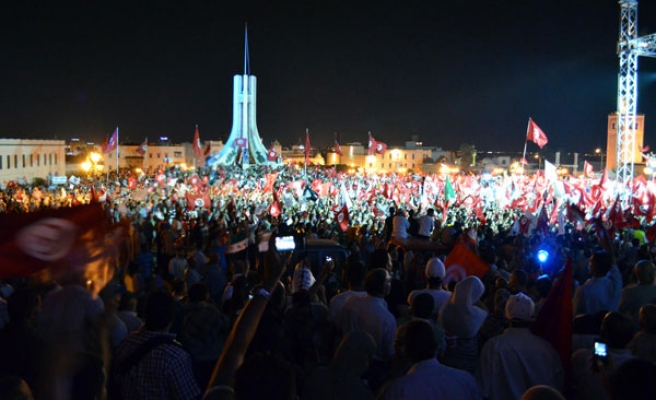 Tens of thousands of Tunisians came out in a show of force for the country's government on Saturday, in one of the largest demonstrations since the 2011 revolution.

Shouting, "No to coups, yes to elections," supporters of the ruling Ennahda party crowded into Kasbah Square next to the prime minister's office in the capital, Tunis.

Ennahda, a moderate Islamist party, called on supporters of the embattled government to join the rally to push back against a week of mass protests calling for the government's ouster.

"We support the legitimacy of the government because we care about Tunisia and we care about democracy, not Ennahda," said 40-year-old Suad Nasri, a Tunisian flag wrapped around her head.

"I'm not an Ennahda backer, but I want our democracy to succeed."

Kasbah Square was the site of major rallies in the days after autocratic President Zine el-Abidine Ben Aliwas toppled in 2011, with demonstrators demanding a transitional constituent assembly to draft a new constitution - one of the bodies the opposition is now demanding be dissolved.

"Tunisia is in need of national unity. ... I call for calm so that the army and security forces can combat terrorism and not waste its efforts on protests," Prime Minister Ali Larayedh told a news conference.

The opposition, which has been rallying daily, is planning a march on Sunday.

The ministry said two "dangerous terrorists" were arrested for suspected involvement in the attempt. A third suspect was still on the run after trading machine-gun fire with security forces, the ministry said.

On Friday, Tunisian forces launched air and artillery strikes to try to rout gunmen who killed eight soldiers earlier this week in one of the deadliest attacks on security forces in decades.

A fledgling "Arab Spring" democracy, Tunisia now faces one of the worst crises since Ben Ali was toppled, the first in a wave of uprisings across the region.

Planned talks on the political and security crises on Saturday failed to produce results, as the main opposition groups declined to attend.

Instead, both the government and the opposition reiterated the positions they have held all week.