More than 60 wounded - at least 20 of them in critical condition - were taken to various hospitals with shrapnel injuries and torn limbs, medical officials said. 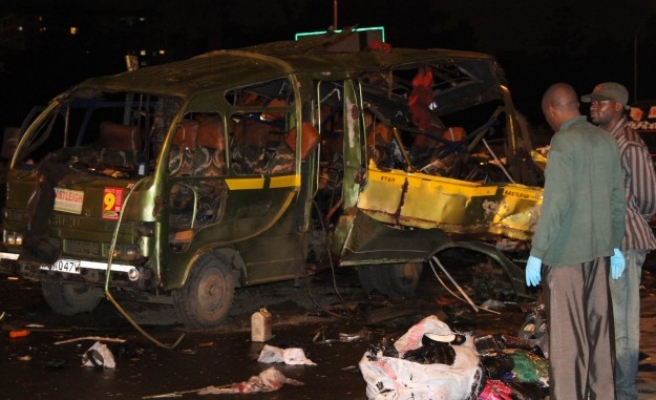 At least three people were killed when two buses driving on a busy highway in the Kenyan capital Nairobi were struck by explosive devices on Sunday, the day after attacks in Mombasa.

There was no immediate claim of responsibility but Kenya has blamed similar attacks on Somali group al Shabaab, which killed at least 67 people at the Westgate shopping mall in Nairobi last September.

"So far three people have been confirmed dead, one was killed at the scene and two died in hospital," Moses Ombati, the deputy police commander for Nairobi told Reuters.

"The final report will be known later tonight or tomorrow, once we check with all the hospitals."

More than 60 wounded - at least 20 of them in critical condition - were taken to various hospitals with shrapnel injuries and torn limbs, medical officials said.

Sunday's blasts came a day after twin explosions in the port city of Mombasa on the Indian Ocean, a tourist magnet.

Four people were killed in the Mombasa attacks when attackers threw an explosive device at passengers at a bus station, and also targeted a luxury hotel in the coastal city.

On Sunday, blood and broken glass littered the road where the two buses stood about one km from each other. Both were heading out of town along Thika Super Highway, which connects the capital to the outskirts of the city.

Police believed that the attackers had planted improvised explosive devices inside the buses, posing as passengers.

One of the buses, painted green, had its rear window blown off and all windows shattered, while the other bus, red in colour, had a huge hole ripped out of its side.

Several passengers from the buses were being treated on the road, while the severely wounded were rushed to hospitals.