An estimated one in seven children under five are acutely malnourished. More than 2.1 million more people are vulnerable. 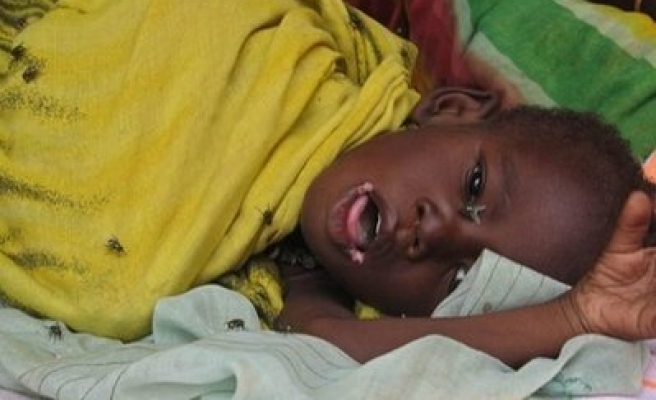 When African peacekeepers and Somali troops launched an offensive against Islamist militants in Somalia's small seaside town of Marka, Rukia Nur and her 10 children joined the stream of thousands who have fled to the capital in past months.

They now make their home in a sprawling camp in Mogadishu's outskirts - a place at the centre of a growing hunger crisis three years after Somalia's devastating 2011 famine.

The United Nations said this month more than a million people in this war-ravaged country were struggling to meet daily nutritional needs. The roughly 130,000 people displaced from their homes this year alone are bearing the brunt of the crisis.

"Life is terrible. We are hungry," said Nur, amidst the dusty streets and shabby shelters where her family lives without basic amenities. "There are no toilets here. We have to bury children' faeces in the sand like cats."

The exodus of people from their homes and poor rainfall is pushing Somalia towards a new crisis, hurting the government's bid to establish order after two decades of chaos and conflict.

It also highlights the challenges facing the 22,000-strong African Union peacekeeping force and the Somali army, which has driven al Shabaab rebels from more towns but struggled to protect supply lines from guerrilla attacks, so markets are left bare and inhabitants like Nur have little choice but to flee.

Marka, a sloping, whitewashed Indian Ocean town south of the capital, has been battered by years of fighting between al Shabaab and their rivals. In better times, Nur had supported her family by selling fire wood.

Now, having sold all her belongings when she fled, she relies on handouts.

Aid agencies, which conceded they responded too late when famine last hit Somalia, are determined to do better this time but are struggling to raise funds and meet the growing needs.

Rudi Van Aaken, who heads the Somalia office of the U.N. Food and Agriculture Organisation, said many retaken towns become isolated so food prices often double. In one major centre, Baidoa, they have quadrupled.

"Commercial traffic is just not taking place," he said.

In the hard-hit Shabelle region, south of Mogadishu, the U.N. World Food Programme (WFP) has been airlifting emergency rations by helicopter, a route that only meets basic needs.

The African troops, still the backbone of security for the government, have said they are working to make sure the offensive does not leave "ghost towns" but poor roads are easily targeted by experienced and skilled al Shabaab guerrillas.

In August, the U.N. humanitarian coordinator for Somalia said rapidly rising malnutrition and food shortages across the country resemble the warning signs that preceded the 2011 famine in which about 260,000 people died.

"Only years after this famine where basically we said 'never again', a crisis is unfolding in front of us," the coordinator, Philippe Lazzarini, told Reuters at the time. But he also said another full-blown crisis was "totally preventable".

With conflicts raging in South Sudan, Syria and Iraq, and the Ebola crisis in West Africa, aid budgets are stretched. The U.N. appeal for Somalia has raised just 32 percent of the $933 million it needs in 2014.

"The situation is not as bad as 2010 and 2011, but waiting until the situation deteriorates will be too late," Laila Ali, a WFP spokeswoman, said in Mogadishu. "Without adequate resources the scale of humanitarian response is likely to be limited."

WFP's hot meal centres in Mogadishu are now seeing 10,000 more visitors arrive each month than reported in June. It has been treating 12,000 more children, pregnant women and breastfeeding mothers for acute malnutrition.

Figures from the start of the year showed a 20 percent increase in the number of Somalis struggling to meet daily mininum food requirements, according to U.N. data.

An estimated one in seven children under five are acutely malnourished. More than 2.1 million more people are vulnerable.

"We have security in the camps but there is no life," said Ibrahim Aden, 56, a seasonal farmer from Baidoa, who had trudged 260 km (160 miles) to the capital by foot and had the blisters to show for it.

"We are just waiting help from Allah and the aid agencies," he said. "There is no other hope of survival."