Nigeria grows some 1.5 million tonnes of tomatoes every year, making it the 14th biggest producer in the world, with hopes to tackle poverty that is fuelling Boko Haram 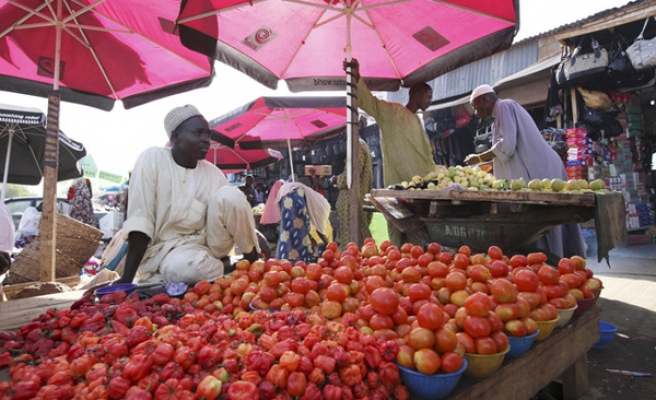 It's a situation that mirrors the giant oil industry, where Nigeria has abundant resources but has lacked the capacity, will or ability to exploit it, forcing a reliance on imports.

But Africa's richest man Aliko Dangote is hoping to change tomato production with a giant factory that will boost domestic output, create jobs -- and even, indirectly, fight Boko Haram.

For the past five years, the Dangote Group conglomerate he heads has been working to build a $20-million (18.4-million-euro) tomato processing plant outside the northern city of Kano.

The city and state of the same name has been blighted by poverty and unemployment, seen as key drivers to radicalisation fuelling the insurgency in the wider north since 2009.

But it's hoped the giant factory the size of 10 football pitches, set alongside 17,000 hectares (acres) of irrigated fields, will help by tapping a potential agricultural goldmine.

When the Dangote factory opens from next month it will provide 430,000 tonnes of paste that is used widely in Nigerian dishes from jollof rice to fiery soups.

"Nigeria is such a huge market for tomato paste that we will find quite challenging to satisfy," the factory's general manager, Abdulkarim Kaita, told AFP.

"Already local tomato paste packaging companies have placed orders with us which we will have to work hard to satisfy.

"We are set to begin operations. We are only waiting for the tomatoes which are ripening in the fields."

Nigeria is the 14 largest tomato producer in the worlds but is forced to rely on imports of tomato puree, mostly from China, because of a lack of processing plants.

Dangote's factory, built by Switzerland-based Syngenta, will directly employ 120 people and 50,000 farmers have been engaged to grow the tomatoes required for the process of making concentrate.

The Central Bank of Nigeria has provided technical assistance such as soft loans for seeds and fertiliser. The factory will then buy the produce at competitive rates, said Kaita.

Currently, about half of the local tomato crop rots because of a lack of storage facilities, poor pricing and access to markets, which has prompted many farmers to stop cultivation, said the CBN.

The improved seed varieties to increase yields, access to chemicals, more up-to-date farming techniques and a ready market for the produce is designed to entice farmers back.

"Once we start production the factory will be providing employment to farmers and (the) tomato paste packaging industry, traders, haulage operators and many others to support the tomato value chain," said production manager Ashwin Patil.

Plans to increase production -- and acquire an idle tomato paste factory in neighbouring Kaduna state -- are in the pipeline, he added.

For farmers such as Yusuf Ado Kadawa, it's a lifeline.

"We really incur heavy losses from our yield, which rots away due to lack of (a) ready market for our tomatoes, which is a perishable produce. But now we have a market close to us," he said.

President Muhammadu Buhari is keen to diversify Nigeria's economy away from an over-reliance on oil as revenues have been severely depleted by the global slump in crude prices.

Former agriculture minister Akinwumi Adesina, now head of the African Development Bank, in 2013 described the sector as "the new oil".

Some 30 percent of Nigeria's estimated 170 million people are employed in agriculture, mostly at a subsistence level, although moves have been made to commercialise production.

Erratic power supply, which Nigeria has been grappling with for more than two decades, and lack of import controls remain the factory's main challenges.

The factory will have to rely on diesel-hungry generators for electricity, adding to production costs and reducing competitiveness with cheaper imports.

Both issues contributed to the collapse of hundreds of factories in Dangote's home state of Kano in the past two decades, including his textile and wheat flour factories.

"Once the government can place restrictions on the import of Chinese tomato pastes... the sky's the limit for the Dangote tomato paste because the market is there for them to exploit," he added.