Traces of Gaddafi in Benghazi being erased

Gaddafi's palace in Benghazi has been completely destroyed by rebels since February, the month when incidents began in that city. 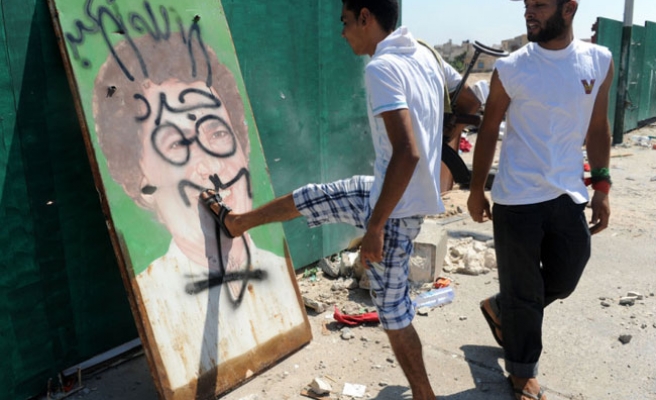 The traces of the Muammar Gaddafi regime are being erased in the center of Libyan opposition, Benghazi city.

Gaddafi's palace in Benghazi has been completely destroyed by rebels since February, the month when incidents began in that city.

Residents of Benghazi were always curious about Gaddafi's palace and, following the destruction of the surrounding walls, they had a chance to see what was inside the palace.

Although six months have passed, many Libyans still visit the palace that has been completely burnt and destroyed.

The walls that still remain at the palace carry freedom slogans written by the Libyans as well as funny drawings on Gaddafi.

Speaking to the AA at the palace, a player of the Libyan national basketball team, Zeynel Abidin Mekraz, said that Gaddafi in recent years came to Benghazi only a few times as he was concerned about the people's opposition.

Gaddafi did not like Benghazi due to the presence of the opposition. Gaddafi's son Al Saad had to escape from the palace in a helicopter on February 17 when incidents began, Mekraz said.

During the incidents, sharp shooters at the entrance of the palace fired on the people randomly and killed many individuals, Mekraz said.

As incidents got worse, Al Mahdi Zeo, a father of two children, went to the palace in his vehicle full of explosives and gas bottles and blew himself up, Mekraz said.

After Zeo sacrificed himself, the rebels got control of the palace. Zeo is a hero of the Libyans, Mekraz said.

There is a prison and an armoury at the basement of Gaddafi's palace.

Opposition members and disloyal soldiers were kept at the prison in the palace.

Rebels who discovered bullets at the armoury used these bullets against Gaddafi forces.

The shelter at the basement has thick walls and an iron door.

There are bags of trash and many burnt vehicles in the garden of the palace.

Children collect olives from trees in the garden of the palace.

A building used as the center of Benghazi Police during the Gaddafi regime was also burned down by the rebels.

Schools being used as military bases

Once Benghazi was captured by the rebels, all schools began to be used as military bases.

As soldiers and police officers sleep in the schools, military vehicles wait in the gardens.

Soldiers now use a building that was part of an international university up until recently. The walls of the building were badly damaged in clashes.

Sand bags could be seen at the entrance doors of the schools.

While the new academic year is on the horizon, no one knows when the schools will be re-opened.

Officials of the National Transitional Council plan to begin education in primary schools soon if not the universities.

Meanwhile, one can see piles of trash in all corners of Benghazi. Trash bags and trash containers pose a risk to the health of Benghazi residents.

Mekraz said that trash collectors from southern Africa fled to their home countries after violence erupted in Benghazi.