Haley arrived in regional capital Goma by plane from the DRC capital Kinshasa before boarding a UN helicopter for Kitchanga, about 80 kilometres (50 miles) forced from their homes by violence, UN sources said. 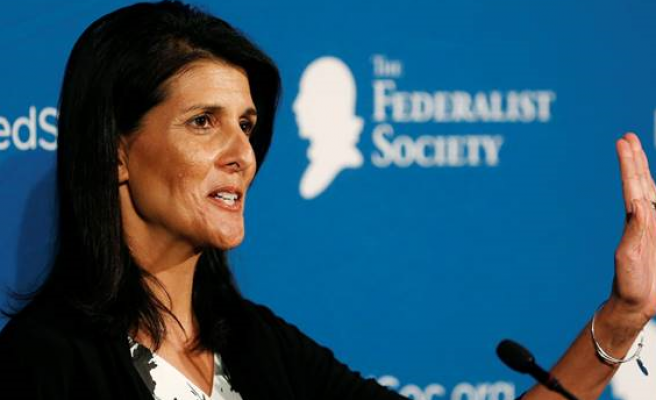 The US ambassador to the United Nations, Nikki Haley, headed Thursday for a displaced people's camp on a visit to the strife-ravaged east of Democratic Republic of Congo.

Haley will stay until Friday in the DRC, the last leg of a maiden trip to Africa which has taken her to Ethiopia and South Sudan.

The envoy is the most senior official in the administration of President Donald Trump to visit the continent.

Violence has increased in recent months in South Sudan and the DRC, despite a strong peacekeeping presence.

MONUSCO, the UN stablisation mission deployed in the DRC, is the world's largest such force and includes some 18,000 troops and police. The United Nations first intervened before the end of the Second Congo War in 2003.

According to official and diplomatic sources in Kinshasa, Haley is scheduled to hold meetings on Friday with President Joseph Kabila and also the opposition and civil society.

She is expected to press Kabila to agree to a timetable for elections.

Her visit comes as the vast, mineral-rich central African country is facing a humanitarian, security and political crisis.

Polls were due this year under a transitional deal with the opposition aimed at avoiding fresh political bloodshed after Kabila refused to step down when his second mandate ended in December.

The international community has pressed for a vote to choose a new head of state to be held as soon as possible but no timetable has been set so far.

The electoral commission responsible for organising the ballot says it will be impossible before early 2019.

Under the deal, Kabila is allowed to remain in office pending the elections, ruling in tandem with a transitional watchdog and a new premier, to be chosen within opposition ranks.

Several dozen opponents to Kabila held a rally outside the MONUSCO headquarters in Goma, an AFP journalist saw.

One placard read, "17 years of Kabila, 17 years of poverty and unemployment. Enough is enough."

Another called for "justice for Zaida Catalan and Michael Sharp," two UN experts -- one a joint Swedish-Canadian national and the other an American -- who were found brutally killed in March when they went to investigate violence in the central region of Kasai.

In South Sudan on Wednesday, Haley voiced "disappointment" and concern about the situation in a country that has been devastated by a civil war.

She was escorted out of a UN camp when protestors angry at South Sudanese President Salva Kiir turned up.