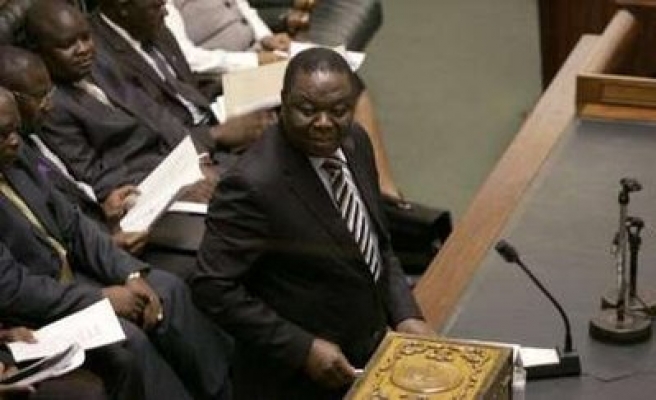 Pressure on Zimbabwe opposition leader Morgan Tsvangirai to quit rose on Friday as senior members of his party debated whether to call an early congress to decide on his future after losing three presidential elections.

Tsvangirai, 61, has led the Movement for Democratic Change (MDC) since it was formed in 1999 to challenge President Robert Mugabe - the sole ruler since the former Rhodesia gained independence from Britain in 1980 - and his ZANU-PF party.

But the ex-labour union leader has failed to dislodge the 89-year-old Mugabe in three elections, although none of them was free or fair according to the MDC and Western observers.

MDC deputy treasurer Elton Mangoma sent an open letter to Tsvangirai this week asking him to step down, arguing that he had failed to push through reforms while in a four-year power-sharing government with Mugabe.

"It is my unbending resolve that leadership renewal...could be the only avenue to restoring the credibility of the party lest it risks being confined to history," Mangoma said.

He also accused MDC officials in the unity government formed after a disputed election in 2008 of accumulating personal wealth.

Friday's debate by the MDC executive ended with a decision not to hold an early party congress because there was "no leadership crisis" now, but leaving open the possibility of the larger, MDC national council to decide the matter at its next sitting, party spokesman Douglas Mwonzora told Reuters.

Previous moves to bring forward the congress have failed in the last six months. The next 3,000-member congress, normally held every 5 years, is set for 2016. Even if it were advanced, analysts predict a drawn-out leadership contest that is likely further to weaken or divide the MDC.

The MDC, evicted from the coalition government after its crushing defeat in last year's parliamentary election, is split over whether to dump Tsvangirai before the next vote in 2018.

While accusing ZANU-PF of violence and vote-rigging to keep power, some MDC officials say Tsvangirai has been damaged by sex scandals and often outsmarted by Mugabe, Africa's oldest leader.

Tsvangirai's camp says Mangoma is a Trojan horse for MDC Secretary-General and former finance minister Tendai Biti, who denies he is manoeuvring to succeed Tsvangirai, but who has not come out publicly in his support.

Diplomats say Tsvangirai's foes may have made a tactical blunder by disclosing that he has been offered a $3 million golden handshake, making it difficult for him to accept.

"They should have handled some of this stuff privately to preserve his dignity," said an diplomat from a neighbouring country. "They might actually wake up a lot weaker if he digs in and the whole thing turns into a mess."